Alexandra Abuza, a garden designer based in New York, first started designing gardens in Maine. This project, transforming a 25′ x 21′ garden in Greenpoint, Brooklyn, was Abuza’s first city undertaking and presented some significant challenges. The owner of the garden, Alan Oxman, a film editor, wanted immediate gratification in his small space; to fufill his vision, Abuza created a miniature landscape packed with plants, which includes a patio at one end and a bench at the other. (The entire backyard, including the patio, is 48′ x 21′.) We asked Abuza some questions about the garden design and we’ve put together her answers in our slide show: A Garden Grows in Brooklyn. Be sure to click through to see the rapid development of this backyard from a gray, concrete lot to a private, leafy oasis in the heart of the city. 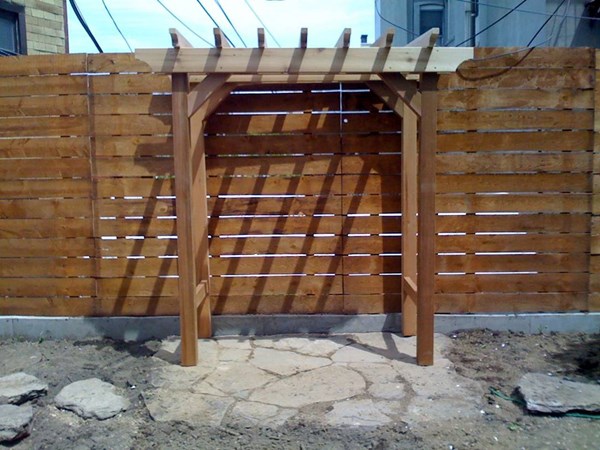 How long did the garden take to complete?

Abuza: Complete? Are gardens ever complete?! The hardscaping probably took about two weeks—though it’s hard to say as I wasn’t working on it full-time. After bringing the materials in, it was really just me doing the installation. I put in the majority of the plants in about five long days—but of course there were some additions and changes, as there will continue to be throughout time. I would say with soil amendments, hardscaping, and plants, it took about 8 to 10 weeks because I was only working on it part-time. 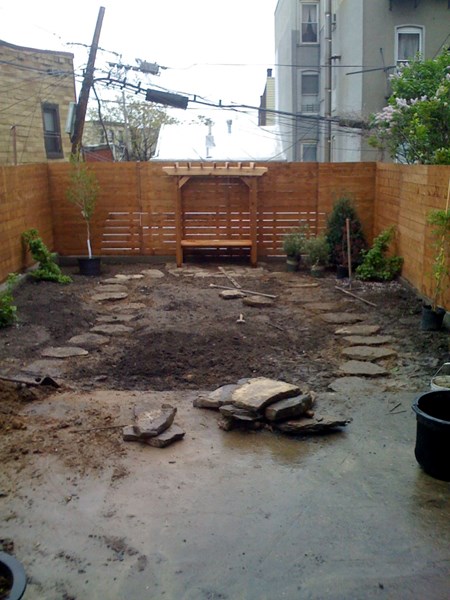 Did you start with the furniture or the plants?

Abuza: I started with the stonework and hardscaping.

There was already a fence and I installed a fieldstone path and patio, as well as an arbor which I had designed and had built. Before I started gardening, I worked as a landscape mason, so I really view hardscaping as the skeleton of the garden, which you install first and then flesh out with plants. 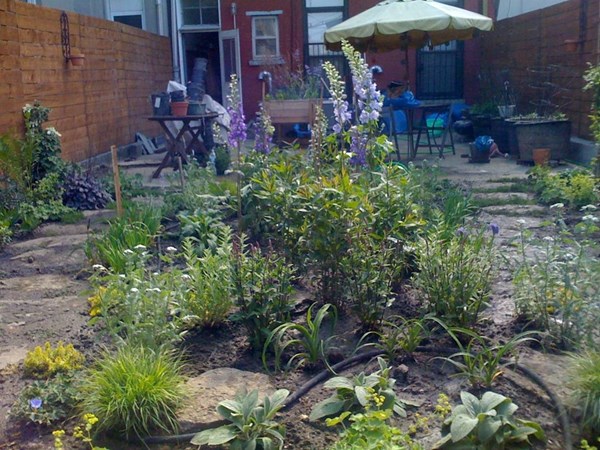 What was most important to you and the garden owner when you started your design? Was there a mission statement?

Abuza: This was a great garden for me as I felt a real kinship with the owner. We both seem to feel a certain wistfulness about city living, even though we love it. So there was almost a romantic instinct—a kind of feeling of  “let’s create something that looks like it has always been here, something a little wild and old.” I chose fieldstones with lichen and moss on them and I planted Irish moss and creeping thyme between the stepping stones. The owner wanted things to spring out and to be leafy and lush. Also, he wanted to cover the walls of the fence that he had—with mixed feelings—erected (of course, I had to explain that this would be a process). 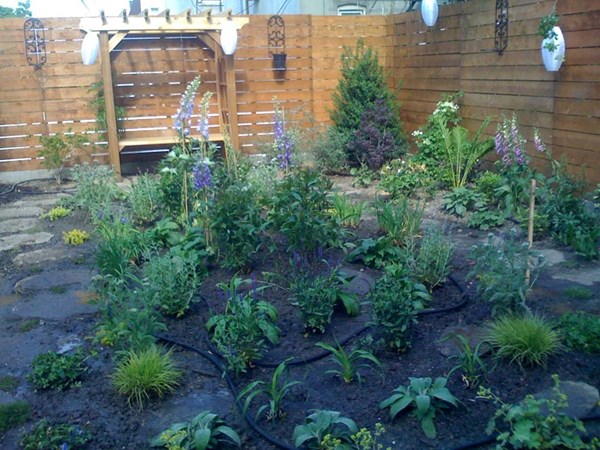 Were there any particular challenges with this space? How did you address them?

Abuza: The first challenge was the condition of the soil. Like most city soils, it was super-compacted and full of debris and broken building materials. I did a lot of soil turning and double-digging and pulled out tons of broken pieces of concrete, mortar, old bricks, plastic toys, and more. I then imported a few yards of top soil and amendments, which brings me to the second challenge: access!

This was my first city project. Prior to this project, I had always had the luxury of massing materials at the bottom of people’s driveways and picking away at these piles. At the start of this installation, we had a delivery of five yards of soil, plus bag after bag of amendment, and two pallets of fieldstone. All of this had to be moved from the street QUICKLY, then up a ramp we built for the wheelbarrows, and then through a very long, very narrow hallway. I had three guys working with me: one outside helping load the wheelbarrows, one in the garden helping to empty them, and then one helping me run the wheelbarrows. This lasted for about three or four hours and then we had the difficulty of figuring out where to keep the materials in an already tight space. The most difficult part was four weeks later—getting a crabapple tree down the hallway on a hand-truck. 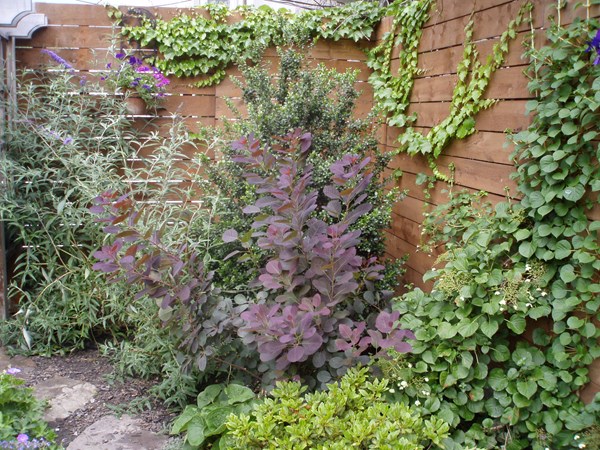 Tell us about some of the plants and materials you used in this garden.

Abuza: For the fieldstone, I went for the pieces that had the most age to them. The climbing hydrangea is an important piece of the garden, as the leaves are so lustrous and there is something very rich and old-looking about them even when they are young. They are also important because the owner really wants to cover the walls of his fence—which is happening, though at nature’s pace. I think the Nepeta, Russian sage, lady’s mantle, and cranesbill geranium are very important as they help give the garden the untamed, wild effect the owner wanted. 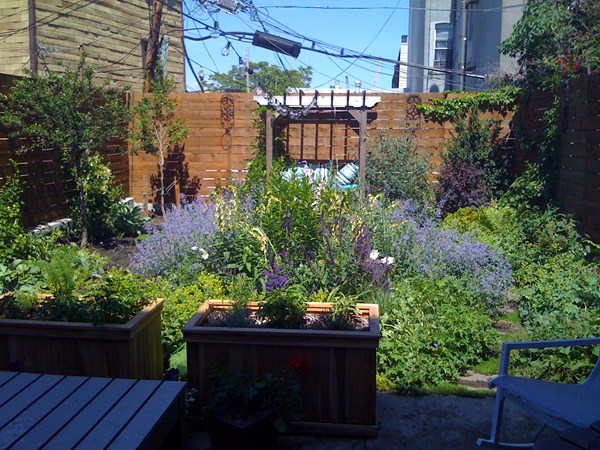 How did you decide on this color palette?

Abuza: There were two aspects of this garden that informed my decisions about color. The first is that it’s a relatively small space; it’s a back yard in Greenpoint, Brooklyn, and the owner had put up tall fencing around it for more privacy. I felt that if there were too many colors, it might start to feel a little “close” and confined. So I opted to stick with blues, violets, yellows and a lot of silvery greens, in hopes that a more monochromatic scheme of cooler colors—with the very occasional splash of a hotter color—would allow for a more serene, spacious, and expansive space. Also, at the risk of sounding as though I create gender-specific gardens, the owner is a man and he was single at the time, so I mostly stuck with colors that are traditionally considered more masculine—as much as I hate to admit it! 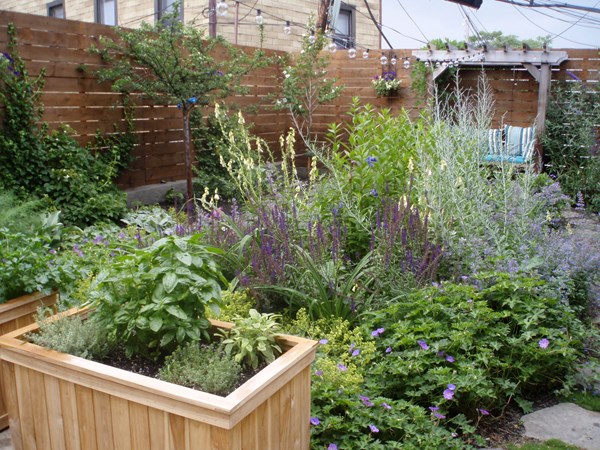 What is the garden owner like? How has he changed or worked with your design?

Abuza: He’s a little indecisive, which is okay with a garden, as they are pretty easy to change. For example, after he had agreed on the plan and I had installed stones and many of the plants, he decided he wanted a large tree planted to the left of the garden. He is also clipper-happy, which drives me crazy. Mostly though, he is someone who really seems to appreciate the respite the garden affords him and he’s pretty easy-going. Often, when I come back for visits, I see that something has been cut way back or moved. I guess he’s a little restless and I get that feeling that a mother gets when her five-year-old locks herself in the bathroom only to re-emerge after she’s cut off all her hair. Mostly, though, he’s a wonderful person—and I’m glad his restlessness brings him to the garden! 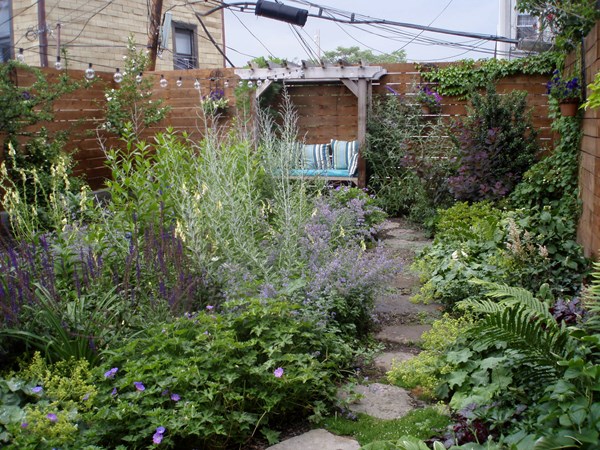 The masterpiece is finished! Now how are you going to change it next year?

Abuza: I will definitely flesh out the space beneath the crabapple tree. I had left this unplanted for a while as its roots got disturbed when we brought it down the hall (it actually took quite a beating), so I didn’t want to do an underplanting until it established itself. We will remove one Buddleja and generally do some thinning and moving, as I planted very heavily because the owner was anxious to be rid of the concrete-jungle feeling and wanted everything to be leafy, fast. So that was always the plan: We would plant thickly and then thin later, to give him something lush faster. He actually has a bunch of planters at the front of his house now, so a number of things will be moved out there.

At GARDEN DESIGN, we love to see our readers’ gardens. This slide show of a backyard in the Greenpoint neighborhood of Brooklyn is our first showcase of a garden transformed. We’re looking forward to featuring many more of your homes and gardens in the future and we can’t wait to see your photographs.