Benjamin Vogt is in love with the Nebraska prairie and laments the loss of the original tallgrass ecosystem with its amazing native plants and wildlife. It is said that the only remnants of this original ecosystem are in pioneer graveyards that were never stripped for farming. In a small, 1,500-square-foot backyard behind his new house, Benjamin’s love for these plants has created a model of good planting design that is low maintenance, ecologically inclined, and fabulous in every season. 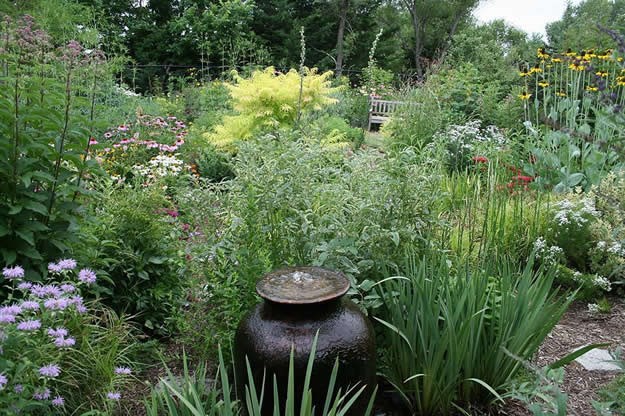 Shown on the right is huge Rudbeckia maxima, native to eastern Texas and through the south. “It’s a wet-ground lover that thrives in the low spot of the garden. Wind never knocks it down despite the big leaves. On the far left are the tall stalks of Joe Pye weed.

“I want a modest echo of those plants that once lived here before settlement,” says Vogt of his microcosm of plant communities that once blanketed this region. “I love the aesthetic of a prairie—the look. It’s become a moral issue for me—we’re in a time of climate change and vanishing plant and animal species. If it’s human caused, I might be part of the problem. But at least my garden allows me to remain aware of prairie restoration and conservation.” 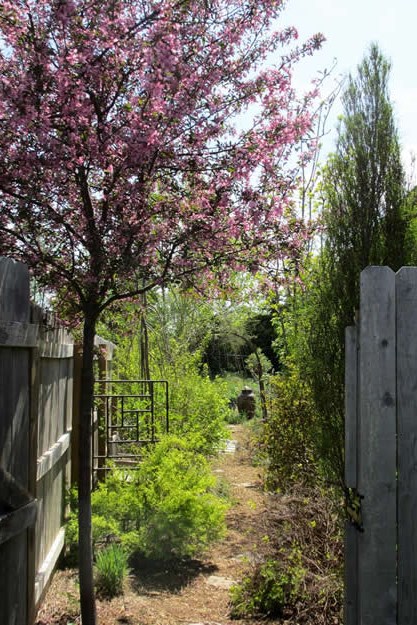 The highlight of Vogt’s sideyard in spring is the crabapple tree as it buds out.

Vogt’s favorite tree, the prairifire crabapple tree grows in the sideyard. “I like its leaf color change through the seasons—from purple in spring to green over summer, then bright orange in the fall. In spring, this one is the only crabapple that lures cedar waxwings. They won’t touch the others. Crabapple fruit needs to go through freeze and thaw before it’s palatable to birds.” 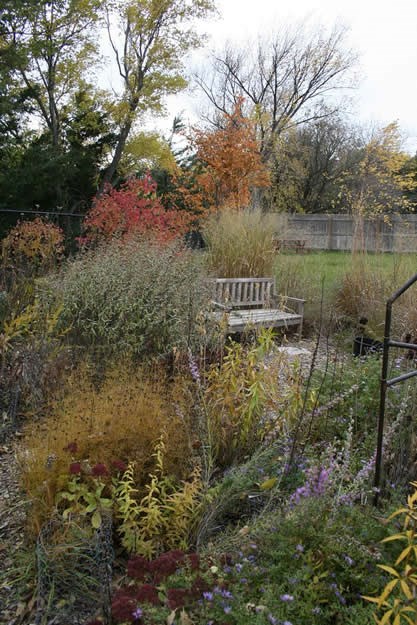 Vogt’s garden, which he began in 2007, is full of seasonal interest.

In July, 2007, Vogt moved into his new house, where the topsoil was scraped away to grade the small backyard. “I found these native prairie plants prefer leaner soils. The perennials produce very deep roots to reach what they need, so there was no need to do much soil preparation on top.” This demonstrates the benefits of using locally native plants that are well adapted to regional soils and weather. “These days I’m tired, so I don’t want to do much in the garden. We all need to learn to let go of the idea that a garden is perfect and accept its natural character.” 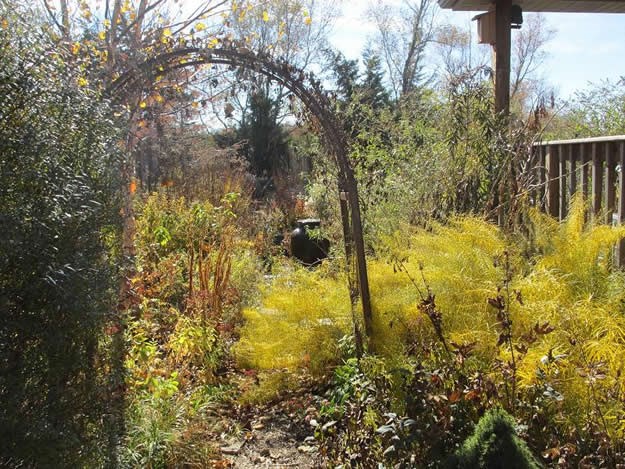 Unlike many other gardeners, he does not cut the plants back for winter.

“There’s tons of fall color even in November. I am so against cutting the garden down for winter because the remnants are where the beneficial insects winter over. They need that cover. All I do to prepare for winter is bring in a hose and remove part of the urn fountain.” 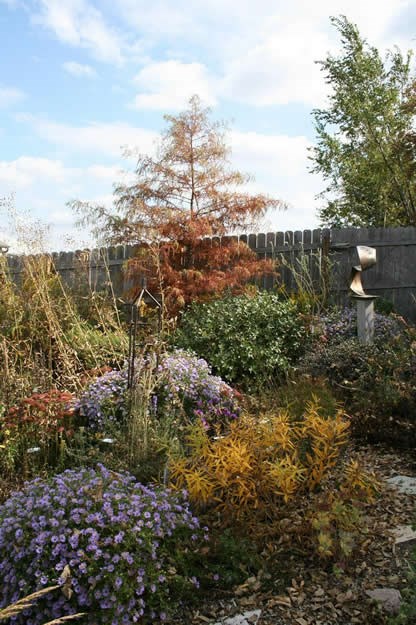 Vogt carefully researches plants to determine whether or not they are a good fit for his garden.

“People never spend the time to research their plants,” Vogt laments. “It’s so important to learn about their habitat.” It is only by understanding how native plants behave in the wild that we know their true wants and needs in the garden. “I look at all my prairie plant resources to determine where and when to plant.” One revelation about planting a prairie garden is that these species are already super adapted to local soils and weather to become established far more quickly. “If I was to do it again I’d buy smaller plants to save money by going with seeding or plugs.” 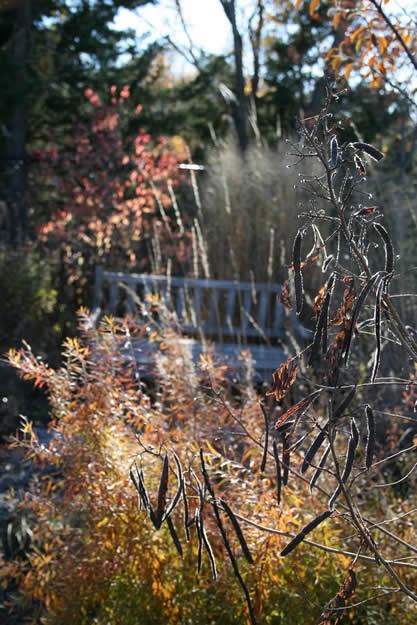 Thanks to the changing colors, autumn is his favorite time of year in the garden.

Vogt’s sense of plant arrangement allows each individual to stand in contrast against its neighbors so they stand out. It is never more visible than in the fall when leaf color is perpetually changing. During the autumn months the garden is always in its glory. 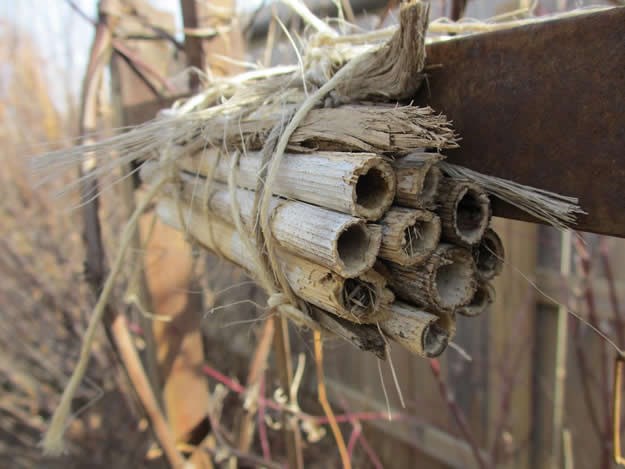 Every effort is taken to provide shelter for insects during the winter months.

Vogt is keen on supporting local insect species by creating places for them to overwinter. A bundle of perennial flower stalks provides the ideal place for protection from the elements. “The beauty and purpose of a four-season garden is to support insect pollinators—one of my most important issues.” 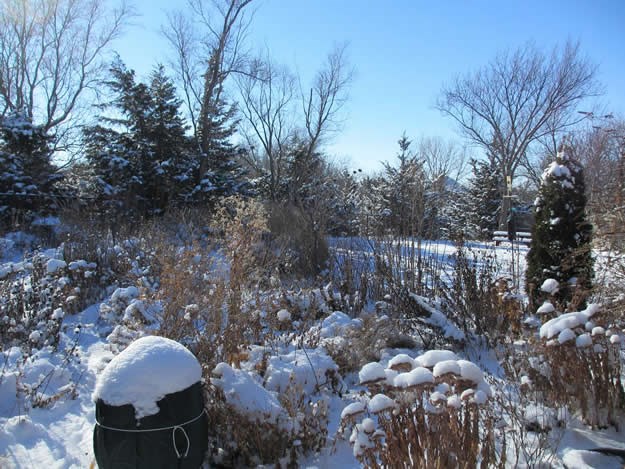 Vogt’s garden even looks lovely after a winter snowfall.

“I like winter because it’s quiet—nobody’s mowing lawns. I feel my neighbors blowing leaves interferes with the natural quiet beauty. I think you can see the garden more clearly in winter when its black and white. The philosophical and psychological aspects of a garden are often lost in the summer, but are quite apparent in winter.”