Vines are often an afterthought, the last category of plants that gardeners think to include in their landscapes. Some gardeners are even afraid of them—too invasive, too much maintenance. The ubiquity and horror stories of English ivy and Chinese wisteria often color the reputation of all vines. And honestly, vines are an ambiguous group: some have woody stems like shrubs and need a permanent home and pruning; others act like perennials, dying back to the ground and reemerging the next growing season; some are legitimately annuals in their life cycle; others are hardy in tropical regions but can be grown as annuals in cooler climates. 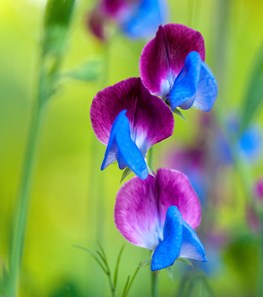 Reputed to have been introduced in Britain around 1700, though possibly developed in the 1920s or ‘30s, either way this is a lovely heirloom of striking color and classic sweet-pea fragrance. Flowers are bicolored, velvety maroon and violet, somewhat smaller than modern cultivars, blooming from spring to early summer. A cool-weather annual, the tendriled vine reaches 6 to 8 feet so is sized right for obelisks, and well-mannered enough for small gardens. Annual. 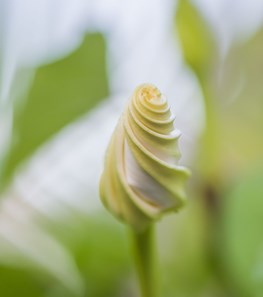 A tender perennial in the morning glory family from tropical Americas with large heart-shaped leaves and huge white flowers. Its fat, ice cream-swirl buds snap open at dusk, wafting their sweet fragrance to attract night-active pollinators like the sphinx moth. Flowers refurl by noon the next day. Produces a mass of luxuriant foliage on 6- to 15-foot vines in a single season, flowering from July to October. I once had 80 blooms on a single plant—knee-buckling. Perennial in Zones 10-12, annual in cooler zones. 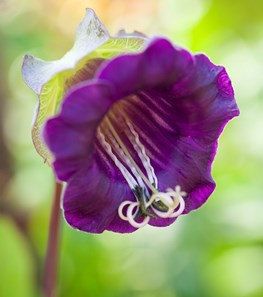 A relative of Jacob’s ladder and phlox, this fast-growing vine from Mexico and South America is not hardy in most of the U.S., but it can bulk up easily in one season to form a screen or arbor cover, using tendrils to climb. Its fascinating 3- to 4-inch flowers, with a purple “cup” resting on a green calyx “saucer,” appear in late summer and fall. Another apropos common name is cathedral bells. To encourage branching, pinch back stem tips. Perennial in Zones 9-11, annual in other zones. 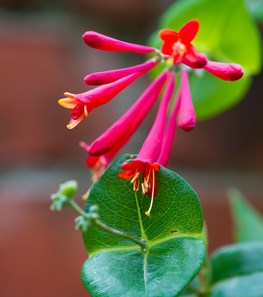 A glorious, floriferous version of native honeysuckle, draped with clusters of bright-red tubular flowers tipped with yellow from late spring through summer. Foliage is clean and free of powdery mildew, providing a blue-green backdrop for the display of blooms. Plant in full sun for best flowering. Woody vining stems reach 6 feet or more in a season. A beacon for hummingbirds. Hardy in Zones 4-8. 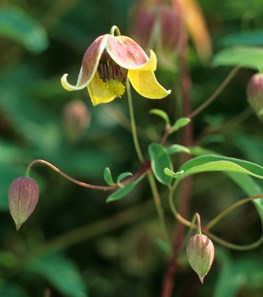 Most people think of clematis as big-blossomed divas. But a host of smaller flowered types can lightly weave their way through the tapestry of the garden. One of my favorites is the hybrid ‘My Angel’, which produces masses of 1-inch four-pronged blooms from June through September in most areas, pinkish bronze on the outside and butter-yellow within. It can grow 8 feet in a season. Zones 4-8. 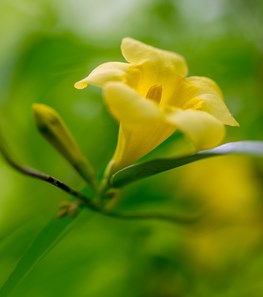 Native to the South, Carolina jessamine is an early bloomer, cloaking itself in fragrant golden blossoms from February to April. Ideal as a backdrop where late-spring and summer bloomers will take over after the jessamine is finished, or intermingle it with a later-flowering vine. A well-mannered woody climber, hardy in Zones 7-10, with evergreen or semi-evergreen foliage. 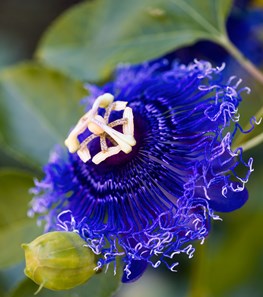 A synergistic hybrid that brings out primo genetics of three species: South American natives Passiflora edulis and P. cincinnata, and U.S. native P. incarnata. Brilliant deep-purple flowers with a frilly corona, highly fragrant, are impressively sized at 4 inches across. Fast growing up to 15 feet or more in a season. Hardy in Zones 9-11, so low temps might knock it back to the ground, but it can resurrect from its roots. 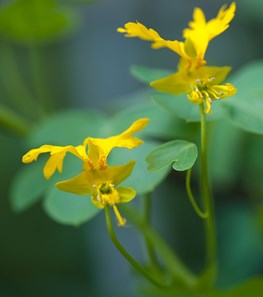 For a garden conversation starter, find a spot to enjoy this nasturtium relative up close. Its dainty, yellow, fringed flowers look like small orchids or bright birds in flight, blooming from summer until hard frost. Likes warm weather, lean soil, and sun to part shade. The featherweight verdancy makes it ideal for rambling over shrubs; nice in a container or hanging basket. Twines by leaf petioles. Mostly grown as an annual but can overwinter in frost-free regions. 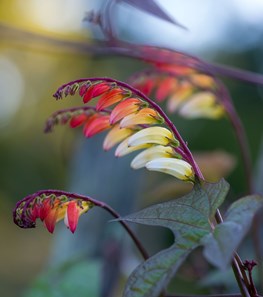 More gardens should add this easy exotic-looking vine, tolerant of heat and drought, to the summer repertoire. Upright racemes have tubular, hummingbird-magnet blooms arrayed along one side of the reddish stalks, giving the plant another common name—Spanish flag. Hot-colored flowers start scarlet then mature to yellow then white, until all colors appear simultaneously, like a snippet of the color wheel. Twining stems reach 10 or more feet. Marginally frost tolerant; hardy in Zones 9-11, typically grown as an annual. 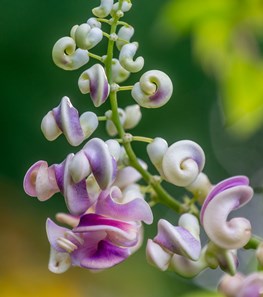 Native to the tropics of Central and South America, this unusual heirloom (Thomas Jefferson called it “the most beautiful bean in the world”) has an intoxicating hyacinth-like fragrance. Also called snail vine, the curly-Q blooms emerge as white buds and transition to purple-pink as they unfurl, held in tight clusters, flowering summer to fall. A substantial vine at 10-20 feet, give it room and strong support. Can overwinter as a tender perennial in Zones 9-11, maybe Zone 8. 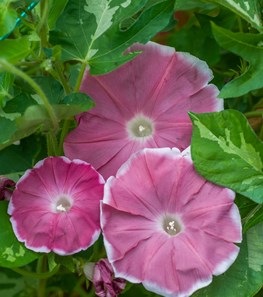 There are lots of annual morning glory varieties. ‘Yuuzuki’ (“the moon in the dusk”) is a prize. Huge flowers, 3 to 5 inches across, are pinkish brown with a white edge. Slow to flower, it’s worth the anticipation; while you wait, enjoy the variegated foliage. This variety originated in Japan where morning glories have been selected and cultivated for centuries. Similar (though without variegated leaves) is the solid-colored ‘Chocolate’. Annual. 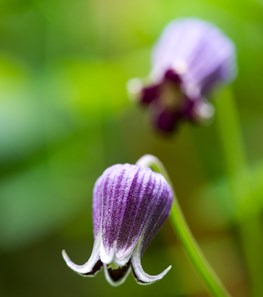 Native perennial from Iowa to Texas, this clematis has purple urn-shaped flowers formed of four thick petal-like sepals with saucy recurved tips. Blooms are dainty and pendulous, like jewels, and stems are wiry and brittle, so be gentle. Climbs by twining leaf petioles, so give it thin-diameter supports it can grasp, or let it clamber gracefully through shrubs or other vines. In my Nashville garden, the similar C. viorna was a treasure. Zones 5-9.

While a handful of vines are certainly well deserving of their wide popularity, most gardeners need to get out of their vine rut. Even Master Gardeners, says horticulturist Allan Armitage, “are hard-pressed to name 10 vines. Clematis, climbing roses, jasmine—they run out after about five names.” Rather than being daunted by the miscellany, we should revel in the variety. As Armitage states in the intro to his book Armitage’s Vines and Climbers (Timber Press, 2010), “I love them all, annual or perennial, and quickly discovered I will never discover them all.”

The myriad less-familiar vining options bring a lot to the table (some of them literally, as edibles) and are worthy of adding to the repertoire for their flowers, foliage, fragrance, and wildlife-friendly qualities. There actually are vines for every type of garden, even if all you want or have room for is something pretty to grace a single obelisk in a container. Growing vines as annuals is an excellent way to experiment and liven up the landscape. Annuals can bring months of blooms and some will even cover an arbor in a single season, without worries about the long term. If you’re looking for commitment, there are plenty of alluring hardy vines to enjoy year after year.

In landscape design, vines are ideally suited to take advantage of multiple dimensions, and are key elements in the vertical gardening movement. According to garden designer Susan Morrison, co-author with Rebecca Sweet of Garden Up! Smart Vertical Gardening for Small and Large Spaces (Cool Springs Press, 2011), “Garden design doesn’t need to just focus on plants in the ground; make the most of the entire space. That includes walls, transitions, and what’s overhead. Going vertical adds a unique touch to gardens of any size.”

Included here is a tempting selection of vines that might be new territory, offering a range of sizes, habits, and flower forms beyond the norm. So assess the vine potential in your landscape and make this year a vertical adventure.