Debra Lee Baldwin authored the Timber Press bestsellers Designing with Succulents, Succulent Container Gardens and Succulents Simplified. Here she reveals insights into the artistry of two designers who share her passion for “plants that drink responsibly.”

Although Todd Holloway of British Columbia and Peter Loyola of Southern California are nearly 1,400 miles apart and have vastly different styles, both designers use succulents as living adornments to create their distinctive container gardens.

Holloway’s streamlined, contemporary aesthetic is consistent with the sleek metal pots his company, Pot Incorporated, designs and fabricates. Loyola, who favors a more rustic look, uses repurposed objects at the Succulent Café—a quaint coffee shop where you can purchase succulent arrangements. In Oceanside, near San Diego, the sun is bright but not searing and temperatures are mild year-round. Vancouver is colder and wetter, but Holloway’s enthusiasm for dry-climate, frost-tender plants has yet to be dampened. He praises succulents as “modern and architectural, with bold leaves that offer sharp contrasts and brazen textures.”

Both say succulents are easy to care for, low-water using, tough, diverse, and intriguing. But what is it about the plants that they like best? It seems succulents are a designer’s dream; like fashion models, they tend to “look good in anything.” 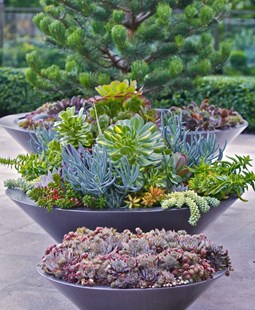 It’s an investment to obtain several of the same or similar containers, but echoing shapes and colors invariably enhances outdoor living areas. And when grouped, such pots create a focal point. The simple lines and neutral, gunmetal-gray color of this trio by Holloway display the succulents they contain without upstaging them. In two are hens and chicks, which will overwinter outdoors in Vancouver. The middle pot is replanted annually; it showcases green and variegated Aeonium cultivars, blue Senecio mandraliscae, Crassula, and Sedum. Succulents benefit from warmth radiated from the hardscape, and don’t drop much leaf litter—a good thing, because these are poolside pots. 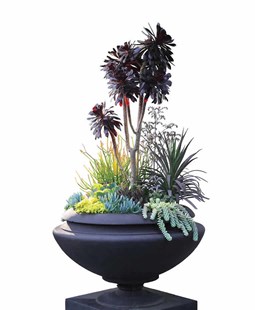 Although another designer might have snapped off the heads of this leggy Aeonium ‘Zwartkop’ (syn. Aeonium ‘Schwarzkopf’) and replanted them as cuttings, Holloway used it to lend height to a composition in a client’s matte black, concrete, Frank Lloyd Wright-designed urn. Filler plants include: strappy-leaved Yucca aloifolia ‘Purpurea’, Sedum morganianum, purple-variegated Echeveria nodulosa, blue Senecio serpens, bright-yellow Sedum makinoi ‘Ogon’, Echeveria ‘Powder Blue’, and Euphorbia tirucalli ‘Sticks on Fire’. When designing with black Aeonium, think of them as silhouettes and position them against a blank wall. If the background is too busy, their dark color makes them disappear. 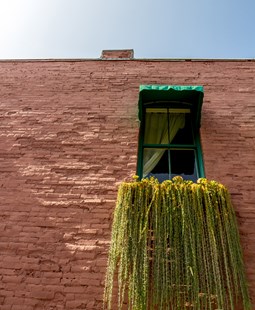 When Peter Loyola acquired his outdoor café’s alley-like space, he saw it not as a characterless rectangle below a looming two-story wall, but rather a canvas awaiting three-dimensional works of living art. He decided to subdue the wall’s “screaming red brick” with trailing Senecio radicans (fish hooks) planted in a window box along with Aeonium rosettes. The green of the succulents contrasts with the bricks, and the multiple strands of the Senecio suggest a waterfall. Evidently it loves this location: “In 10 months, I had to trim it four times,” Loyola says. “If you’re looking for length, fish hooks is the perfect choice.” 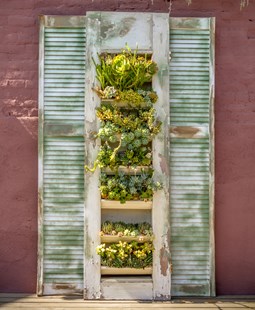 Loyola enjoys the challenge of planting succulents in architectural salvage. To create containers for plants in the hollowed-out center section of an old door, he cut plastic rain gutters to fit. After drilling drainage holes, he painted the gutters butter yellow, which disguises their original function while giving them prominence and making them integral to the composition. Small rosette succulents tucked into the troughs include Aeonium, Sedum, and Echeveria. Growing in 2 to 3 inches of soil is adequate, he says, and “helps them stay small.” He lightly spray-painted the shutters moss green and then sanded to lend a finishing touch. 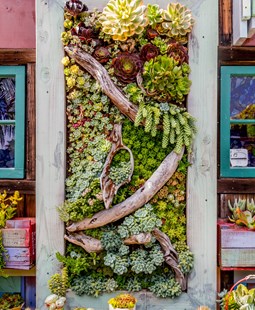 For this 34-by-62-inch vertical garden, Loyola painted a wooden frame pale green, then sanded it to reveal its imperfections. He lined it with a 2-inch-thick sandwich of potting soil and burlap, held in place (front and back) with 18-gauge chicken wire. Driftwood both enhances the design and helps keep the soil from slumping. Using a pointed chopstick to make holes in the burlap, Loyola planted the arrangement (laid flat) with cuttings of Echeveria, Sempervivum, Aeonium, small Crassula, Graptopetalum, and Sedum (notably burro tail). A few weeks later, when roots had anchored the plants, he positioned the planted frame upright. 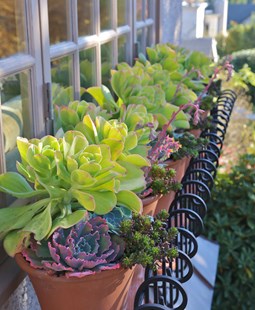 For a hard-to-water window box, Holloway chose tall, tapered terracotta pots. “Their height was right and their rolled rims repeat the iron curves,” he says. He promised the homeowner that succulents would “spark the interest of passersby” as much or more than petunias or geraniums, with significantly less hassle. (Succulents need infrequent irrigation and seldom require deadheading.) Holloway chose those that resemble flowers—rosette Echeveria in blue, pink, and green—plus Sedum rubrotinctum (pork and beans) for contrast and as a trailer. When sunlit, dramatic lime-green Echeveria pallida glows, enhancing the view from indoors. 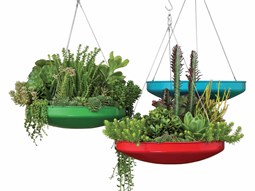 Holloway says he designed these “hover dish planters” expressly for succulents: “There are hanging baskets; why not hanging dishes?” Succulents, he adds, are shallow-rooted, so shallow containers make sense. He planted these with a mix of small Crassula, Sedum, Sempervivum, and Aeonium. Senecio rowleyanus (string-of-pearls), fish hooks, and Sedum ‘Angelina’ cascade from the get-go, and other succulents will become pendant over time. In the red dish, adding height and color, are Euphorbia trigona f. rubra and Euphorbia tirucalli ‘Sticks on Fire’. Holloway’s hover dish planters also look good empty, especially in threes, and could even serve as bird feeders.