Prized for providing year-round interest, grasses are full and lush during the warm months, put on great displays of fall color and are unmatched for winter texture. Once established, most grasses are low-maintenance, drought tolerant and resistant to disease.In addition, they are aesthetically versatile and can be used in gardens styles ranging from cottage to contemporary. See the examples below to get ideas for incorporating grasses into your own garden. 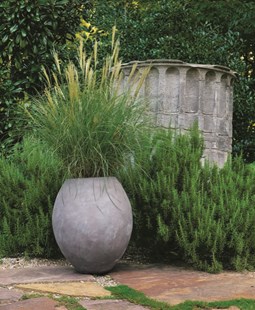 Add them to Containers

They can be used as a tall centerpiece in an urn or planted solo in an oversized container. While not the typical choice, grasses are very well suited for containers.

Incorporate them into a Meadow

Through his designs, John Greenlee has earned a reputation as the master of ornamental grasses. He skillfully combines billowing grasses with dancing wildflowers, bulbs and other plants to create meadows that harmonize with the surrounding landscape. See how he created a Mediterranean meadow for this property in Woodside, California. 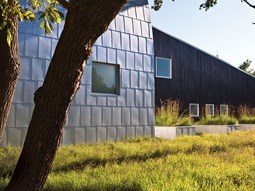 Go for a Mass Planting

If you have the space, ornamental grasses are perfect for large groupings. Outside this contemporary home, a swath of native prairie blue grama grass was planted in lieu of a traditional mown lawn (see more of this Prairie Modern garden in North Dakota).Start with groupings of odd numbers planted closely together,if you aren’t ready to replace your lawn. You’ll find that in multiples, grasses have much more impact. 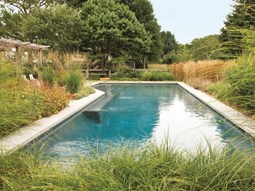 Plant Around Your Pool

Planting around a pool can be a tricky task and it is often neglected or done poorly. Here, Washington, D.C.-based landscape-architecture firm Oehme, van Sweden skillfully surrounded the pool with graceful grasses and perennials that creep over the coping, creating a pond-in-a-meadow atmosphere . Tip: Look for ornamental grasses that don’t drop much litter or else you’ll be constantly cleaning your pool. 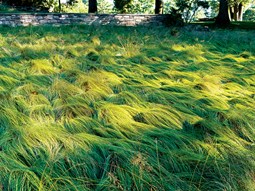 Hillsides are another common garden challenge that can be addressed with ornamental grasses. The gardeners at Chanticleer, one of the nation’s most beloved gardens, avoided the urge to clutter this hill and instead selected a grass, the handsome native prairie dropseed Sporobolus heterolepis, to form a meadow. 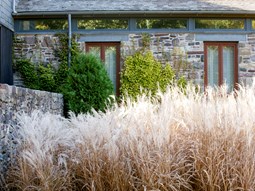 She purposely selected varieties that would turn phosphorescent gold and mauve and planted them in generous drifts for the most seasonal impact. In this garden, designed by Lisa Roth, tawny grasses exhibit autumn’s remarkable changes in depth, texture and color. 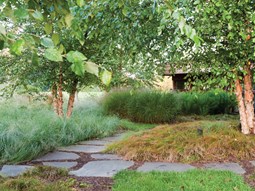 Use Them as a Backdrop

Grasses don’t always have to be the star of the show, in fact they make great supporting actors. In this front garden a simple planting of grasses and sedges forms a subtle, green backdrop for the rough, orange trunks of river birch trees. 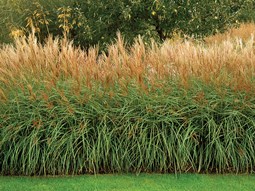 Opt for a Hedge-Like Effect

Believe it or not, when planted imaginatively grasses can help create a sense of privacy for your garden without being too imposing. Select grasses that grow to a considerable height (pictured is Miscanthus sinensis ‘Yakushima Dwarf’ which can reach four-feet) and plant them shoulder-to-shoulder like soldiers in the army. As the grasses mature, they will form a hedge-like barrier that can be used for a screen just about anywhere. 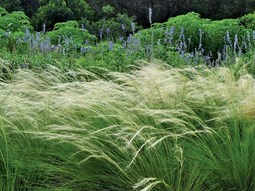 Use Them to Evoke Water

Savvy, creative gardeners can use grasses in their water-saving gardens to create an illusion of watery abundance. Choosing dry-adapted plants to accomplish this sleight of hand makes the illusion even more satisfying. 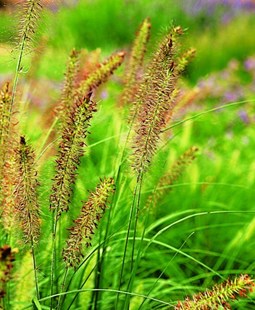 Named for its graceful clumps of narrow foliage and nodding bottlebrush-like flowers, Pennisetum alopecuroides is “a true four-season grass that brings the feeling of the waterfront right into the garden. It catches the wind and nods its foxtail flowerheads into pools seemingly for a drink.” 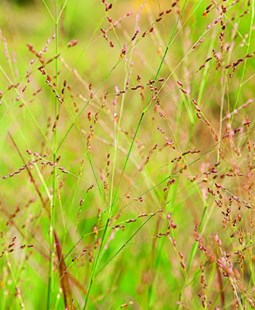