If someone wants to grow native plants as a patriotic gesture, I say fine—that’s more beneficial than planting red, white and violet-blue petunias. But going native has been a popular pursuit for at least a decade before the events of September 11. What is it about native plants and their mystique that makes them so appealing and yet so misunderstood? At a nursery a few years ago, I overheard a determined customer quizzing a patient employee. “I want a plant for a hanging basket that blooms all summer with blue flowers,” she said. “And by the way, it must be native.” She wasn’t being chauvinistic. She just knew “native” was a popular category, and perhaps she had come, like many other gardeners, to equate the word with low maintenance.

But think about the leap a plant must make from a delicately balanced ecosystem to a hanging planter. The idea that natives need less care is often an illogical conclusion—they may actually demand conditions that precisely match their natural surroundings, and nothing else will do. On the other hand, once a native plant becomes well established in a location similar to its homeland, it will often thrive with less care than many other plants.

Before you rush out and plant your garden full of natives, start thinking locally. It’s not enough to put in something that is native to the continent of North America. Think in terms of your region. For instance, gardeners in Connecticut would do well with mountain laurel, a plant that is indigenous to southern New England. When I consider a plant for habitat restoration, I narrow the focus even more locally to plants native to within a 10-mile radius of a site.

Also consider provenance. For instance, although red maples (Acer rubrum) grow naturally from Maine to Florida, one that is a descendant of a nearby population would be a more appropriate choice for planting in the style of a local habitat and would grow better as well.

Plant preservation becomes crucial as habitats are destroyed by development. If we gardeners do not grow certain native plants, they could disappear from the earth. We would mourn the loss of any wildflower for its beauty alone, but nearly all plants have specific interactions with other beings, for example, as a food source for an animal. Take a link out of the food chain—lose an indigenous plant forever—and a reaction may occur that could ultimately lead up the chain to us humans. A considerable number of today’s pharmaceuticals are plant-derived, and the demise of a plant species may mean the loss of a yet-to-be-discovered curative.

It is a sin to collect a plant from the wild. But when a place is threatened, organized rescue groups around the country save plants. These folks get permission from developers to go onto a site, often hours before the bulldozers, and dig as many plants as possible. The saved plants are then distributed to new homes in public and private gardens.

What about creating a sense of place? You can travel across the country and see millions of mirror-image “lawnscapes” with shrubs rigidly pruned beneath high-limbed trees. Often, you would not know where you were without a plane ticket or a road map. But you also may see an occasional tall-grass prairie planting in a Milwaukee suburb or a well-made desert garden outside of Phoenix. These oases of local plants may look different from their neighbors, but they always look right. Many Midwesterners choose tall-grass prairie perennials to use in traditional plantings. Purple coneflower, big bluestem, prairie dock, gayfeather, sunflowers and other prairie natives provide color for borders year after year in a climate that is too hot or too cold for many other perennials.

Native plants are especially popular where wildflowers are still abundant, and can be seen in public gardens, parks and preserves. People flock to the Smoky Mountains in North Carolina to view the wildflowers. Actually, the Southeast is second only to China in the temperate world for a richness of diverse plant species. On the other hand, where native plants are arguably least revered are places whose climates are moderate and support the widest range of plants from around the world. Once rich in indigenous flora, California has lost an estimated 80 percent of its local plants in some areas. Judging by the plants you see while walking the streets of Santa Monica, you are more likely to imagine yourself in the Mediterranean region or southeastern Australia than coastal California. Plants from all around the world have happily made themselves at home.

Perhaps the most important reason to grow indigenous plants is to reduce the stress on an area’s natural resources. As I write this column, a drought emergency has been declared in the state where my garden grows. I won’t be making any new plantings this year. I can already see the wisdom in growing local plants. Even with abnormal precipitation and with no additional watering from me, my woodland garden is faring beautifully beneath white pine and ash trees, in soil mixed to mimic that of the local forest floor. The trillium bloomed in spring. The jack-in-the-pulpits are about to do their thing with hooded spaths unfurling. Yellow wood poppies are still flowering, and even the local azalea is blooming.

Ultimately, the availability of water will determine what gardeners should do or are allowed to do. Planting natives to lessen the strain on resources—from water to gasoline for lawn mowers—may be the most patriotic thing a gardener can do.

And by the way, the woman at the garden center may have found what she was looking for in Evolvulus pilosus, a spreading plant related to morning glories that naturally occurs in little soil pockets—perfect for containers. This trailing native with gray-green leaves and little blue flowers hails from Montana, South Dakota, Arizona and Texas. It’s a pretty plant—and a smart choice in the right locality.

A mother lode of natives to admire in the wild or grow in your garden, from seaside daisy, at the beach, to bristlecone pine, arguably the world’s oldest living tree, at timberline. California has an amazingly diverse range of habitats—forest, meadow, grassland, chaparral, desert, streamside, salt marsh and many more. In total, this region is home to 5,862 native plants, the largest number of any state in the U.S.

Amazing fact: California’s climate and conditions are ideal for passionate plantspeople—you can grow a bristlecone pine in a pot on the deck—and good specimens of plants from all around the world.

Fear factor: Sudden oak death has affected large numbers of tanbark oaks, coast live oaks and black oaks in California’s coastal counties. Caused by a fungus-like organism similar to that which caused the Irish potato famine, it is air, water, and soil-borne. 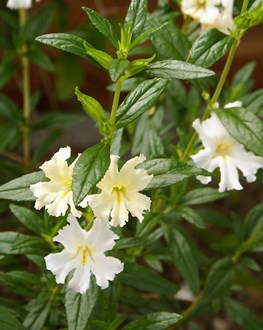 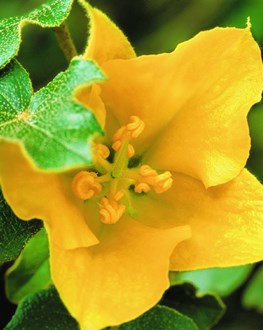 This open, spreading shrub grows to 12 feet in dry, well-drained soil. The large yellow flowers make showy masses from May to June. 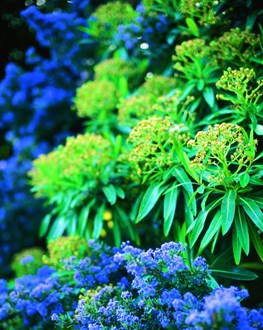 Ceanothus in peak bloom in April in shades of blue (and the less common white) is an unforgettable sight, and there are many outstanding garden cultivars of the wild forms. 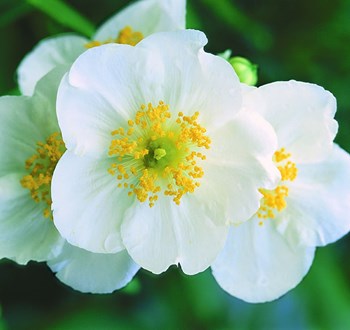