Aching back? Sore hips? Tired of bending over to tend to your plants? Then you may be interested in the VegTrug, a large raised planter that puts your flowers and veggies at waist height. 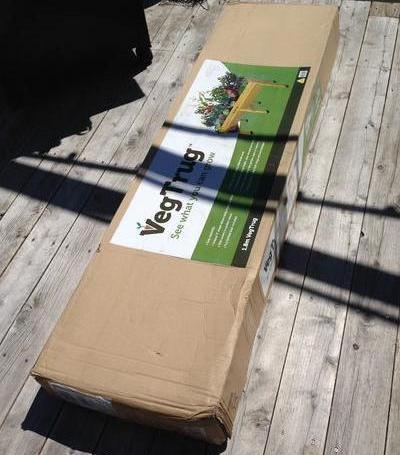 The VegTrug comes in a very large and heavy box

The VegTrug arrived on my doorstep well packed in a large carton. When I opened it, everything was secured in place and undamaged.

The package is very heavy – you’ll probably need two people to move it. Mine sat on the front porch for a couple of days until my husband helped me bring it into the back yard.

Inside the carton you’ll find the wood parts that make up the planter, hardware to attach the parts, a fabric liner that goes inside the planter, and instructions. 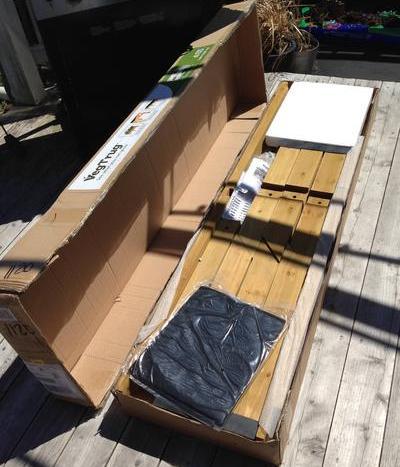 Assembly required a Phillips screwdriver (although I recommend using a drill with a driver bit or an impact driver – there are a lot of screws to fasten and using a screwdriver would quickly become tiring), an adjustable wrench (to tighten the nuts on the leg bolts), and a hammer or rubber mallet (to drive the bolts through the legs).

Assembly and care instructions are in very, very small print – I practically needed a magnifying glass to read them. But there’s a helpful video on YouTube showing how to assemble the VegTrug and it’s not really that complicated. The most important thing is to get the entire thing square and level before screwing the parts together. 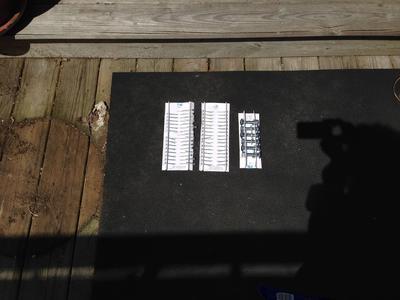 The screws and bolts are well organized

The screws and bolts come attached to cardboard backing and are clearly labeled. This makes it simple to tell which parts you need and whether or not you have enough (there are plenty of spare screws included).

When putting the bolts into the leg pieces, you’ll need a small hammer to tap them into place – otherwise, the bolts won’t go all the way through and you can’t put the nut on.

I assembled the VegTrug by myself in about an hour. It definitely would’ve been easier with a second pair of hands, but it’s certainly possible to do it by your self.

Make sure that all of the parts go in exactly as specified in the instructions. If you put something in backwards or upside-down, the next pieces won’t fit. 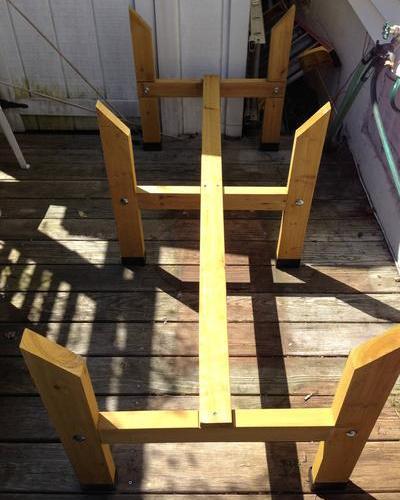 I found that the boards that go around the top edge of the VegTrug didn’t fit very well. It could be that my assembly was a little “off” but it also looked like the side boards were a little too long. Several screws had nothing to screw into…

Once assembled, the VegTrug was very stable – there was no rocking or twisting, even when the planter was lifted and moved.

Note: Assemble the VegTrug where you intend to use it (or near that area). It’s heavy when empty but impossible to move when filled with soil.

The fabric liner was simple to place inside the planter and held up well when soil was dumped into the container. 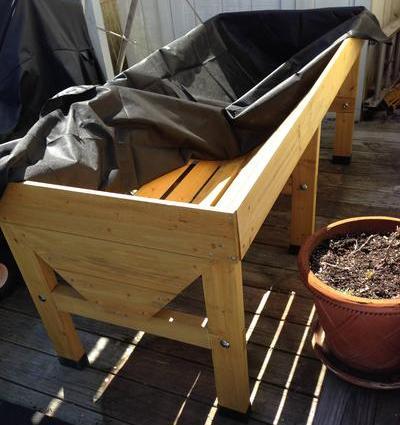 The fabric liner is easy to place inside the VegTrug

The wood smelled really nice when I opened the box (it’s made out of “FSC-certified, sustainable, plantation-grown fir”) but it’s a little soft. Fir is generally considered to be a “soft wood” and doesn’t tend to hold up well in outdoor conditions. After 4 months in the garden, it still looks OK but I’m curious to see how it looks after a winter.

All wood surfaces are coated with a food-safe stain that’s supposed to protect it from all kinds of weather. However, if you read the instructions carefully, it’s clear that you must stain the entire VegTrug several times a year in order to maintain that protection. Unless you remove all of the soil (and it’s a LOT of soil), you won’t be able to stain the inside of the container so I’m not sure how long the trug will really last, especially here in the northeast where we get a lot of sun, rain, and snow. 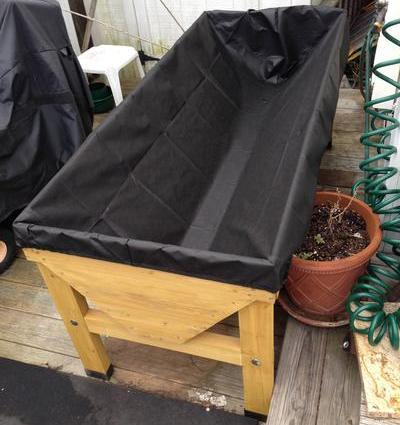 After placing the inner fabric

The legs are capped with a black plastic cap that’s supposed to protect them from wicking up moisture (which would rot the wood). Unfortunately, these caps aren’t attached to the legs – during assembly, they kept falling off and it was a pain to put them back on. Once the trug is fully assembled, don’t lift it up to move it or the caps will fall off!

Because the caps aren’t sealed onto the legs, water drips down the legs and settles into the caps during watering or a rain shower. As a result, the ends of the legs sit in water and wick it up, contributing to wood rot and damage. You may want to consider running a bead of high quality silicone caulk around the inside and top of each cap before you assemble the VegTrug so that water can’t get into the cap.

The VegTrug holds 380 quarts of potting mix. That’s a lot of mix and the trug is extremely heavy after filling it. Be sure to place it where you want it before filling it with container mix because you will NOT be able to move it once it’s full.

I don’t recommend using garden soil to fill the VegTrug – it tends to be much heavier than potting mix, can harbor weed seeds, pests, or diseases, and can compact in a large container, making it harder to work with and potentially smothering plant roots. Instead, use a good container mix supplemented with high quality compost.

Like any container, the VegTrug will need frequent watering, particularly during the hot, dry summer months. Place it near a spigot or within easy reach of a garden hose. Or, better yet, install DIY drip irrigation on a timer.

The V-shaped design of the VegTrug is intended to accommodate both deeper-rooted plants (like tomatoes) in the middle and shallow-rooted plants around the outside. While that’s a good idea in theory, the reality is that the edges of the planter dry out much more quickly than the center does. That makes watering a bit of a problem – if you water to keep the plants along the outside moist, you risk over-watering the deeper rooted plants in the center.

Water drains well from the VegTrug (assuming that you’re using a good quality potting mix) so be sure to place it so that the run-off won’t damage anything nearby and, ideally, where the “waste” water can be used to water nearby plants.

Because the water drains freely, you may find nutrients leach from the planting mix more quickly, resulting in less vigorous plants. I recommend regularly using a high quality compost tea (I like Moo Poo Tea from Haven Brand) and occasional organic fertilizer to boost fruit/vegetable production.

What to Plant in Your VegTrug 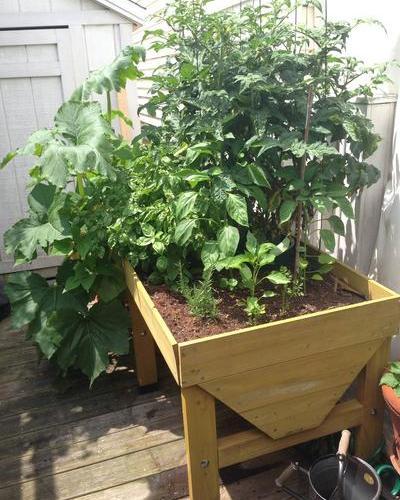 A thriving kitchen garden after 3 months in the VegTrug

Don’t plant anything too tall or you won’t be able to reach it. Keep in mind that the VegTrug is already 31 ½” tall – planting a 4-foot tall plant in the middle would mean that the top is almost 7 feet above the ground! For example, look for shorter varieties of tomatoes (like the ‘Super Bush’ container tomato from Renee’s Garden Seeds – shown in the photo to right), bush beans (instead of pole beans), and dwarf corn.

Everything has grown very well although it was difficult to get tomato cages into the planter due to the limited depth. I had to tie them to the deck railing to keep them from falling over.

The VegTrug comes in two sizes:

Choose a size based on the amount of space you have available and how much you want to grow. Although you can plant closely to get more into a limited space, the sloped bottom of the VegTrug limits what you can plant around the edges.

It’s available in the original yellow color, as well as in charcoal black.

We give the VegTrug a 4-shovel rating. There are a couple of quality questions (how the parts fit together, leg caps, problems staining the inside) that we’ll continue to evaluate and will keep you updated. But, overall, it’s easy to garden in the VegTrug and it brings the garden to you, rather than the other way round.

The VegTrug can be purchased through Gardener’s Supply as well as directly from VegTrug Limited through Amazon where it’s available in the original yellowish color, as well as charcoal grey. Price depends on size – the large size sells for $279 and the smaller one for $199.

There are also VegTrug Greenhouse covers, insect covers, and shade covers. We haven’t evaluated them but they seem like they would be helpful for extending your growing season.

You can also buy replacement liners for the various size VegTrugs.

And finanlly, VegTrug also makes a variety of other planter styles. For one option, see our review of the VegTrug Poppy Planter.

And now over to you – Have you tried growing plants in a raised planter? What did you think? Let us know in the comments below.