For diversity of size, form, foliage and flower color, it is difficult to imagine any other group of plants matching rhododendrons and azaleas. We all know about the spectacular garden hybrids with their blinding colors and huge flower heads. But there is another remarkable group known as species rhododendrons, wild plants found growing naturally in the forests and mountains of the world, many of which make outstanding garden plants. One of the best places to see them is the Rhododendron Species Botanical Garden in Federal Way, Washington, which contains one of the largest collections of rhododendrons worldwide.

AppealThousands of variations with a virtually unlimited palette of floral color blooming from late winter into late summer. Some types are fragrant. The foliage of many species is extremely unusual and attractive, providing year-round interest.

ZonesEasy to grow in cool-summer/mild-winter regions, Zones 5 to 9. Outside of these regions, it is still possible to grow many kinds if care is taken to select the appropriate cultivars or species. The RSBG is considered Zone 8.

ExposureIn general, rhododendrons require a bright but not-too-hot exposure with low soil temperatures. Exceptions are the tiny-leaved alpine and dwarf species, which are best in bright sun. 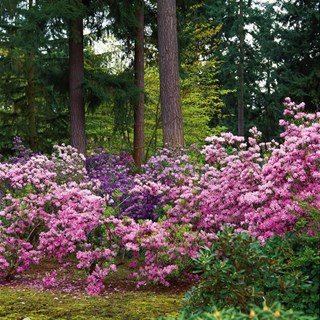 RHODODENDRON DAVIDSONIANUM AND R. AUGUSTINII: Two of the finest and easiest species to grow in their color classes, the deep pink of the former contrasts brilliantly with the lavender blue of the latter.

SoilExcellent drainage in an organic woodland soil or in a sandy soil that has been amended with bark or other organic matter. In heavier and clay soils, plant in raised beds.

CareWater through dry periods. Regular mulching with organic material means extra fertilizer is usually unnecessary. If the plants seem unhealthy, it is usually because of poor drainage.

Read on to discover a collection of wild rhodies that make outstanding garden plants: 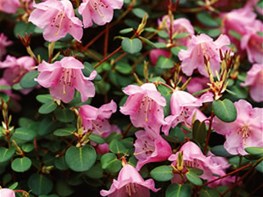 Easy in sun or shade, this species is slow-growing enough to cultivate as a specimen in a large container. 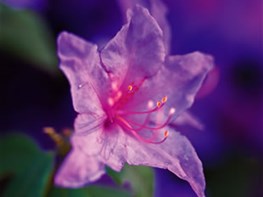 Large-growing species with lavender-blue flowers, suitable for sun or shade. It can be selectively cut back to reduce its size. Selected forms have flowers closer to true blue than almost any other rhododendron. Hardy to 0 degrees. 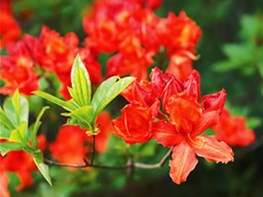 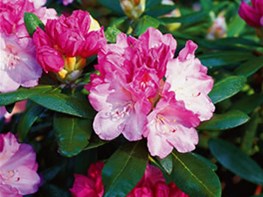 A perfect garden plant and probably the most popular and widely grown species in the world. Native to Japan with a dwarf mounding habit to 3 feet, foliage that is densely hairy or “indumented” on the leaf undersides and perfect apple-blossom-pink flowers fading to pure white. Used extensively in hybridizing programs. Relatively cold and heat tolerant. Hardy to -15 degrees. 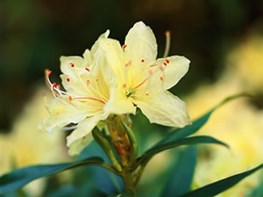 Extremely variable, native to Japan, and, like many plants from that region, it is well-suited to cultivation in East Coast gardens. The pale yellow flowers of the larger growing forms shine in the woodland garden, while a diminutive selection known as ‘Yaku Fairy’, from the mountainous island of Yaku Shima, is the perfect dwarf for a rock or trough garden. 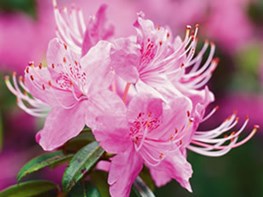 Vigorous and bushy, native to Sichuan, China, extremely floriferous. Does not require the removal of spent-flower trusses-known as deadheading. Lovely flowers range in color from pale pink to lavender or mauve, often with dark red spots. Hardy to about 0 degrees. 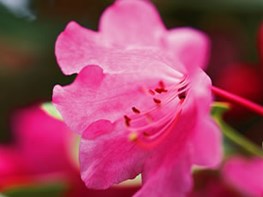 Always attracts attention with its smooth round leaves and rose-to-pink bell-shaped flowers. Best in light shade to maintain the mounding habit and avoid foliage scorch. Hardy to -5 degrees in maritime climates. 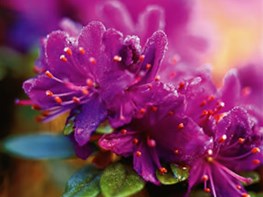 One of the best of the dwarf or “alpine” rhododendrons for the rock garden. Easily grown in a sunny location with excellent drainage, this species forms a dense mound to 3 feet with striking blue-purple to reddish-purple flowers. Native to southwest China. Hardy to -15 degrees. 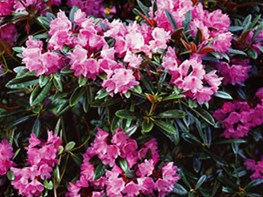 Variable species native over a wide area of Japan, with different forms occurring on virtually every mountain range in the southern half of the island chain. Lower surface of the leaves is coated with a dense furry layer of hairs known as the indumentum, adding welcome color and interest in the nonblooming season. Pink to rose or rarely white flowers appear in late spring, and the plants are quite adaptable in most climates, even tolerating the heat and cold of the East Coast and upper Midwest if provided with proper shade and care. Hardy to -15 degrees.

Deciduous azalea, outstanding as an ornamental for a sunny border or woodland edge. Bright yellow flowers are delightfully fragrant, and autumn foliage brings a bright red splash of color. A clone selected at the RSBG known as ‘Golden Comet’ is an especially fine form with a much larger inflorescence of deep yellow flowers and good resistance to the common, disfiguring but relatively harmless powdery mildew that so often afflicts azaleas. Hardy to -10 degrees.