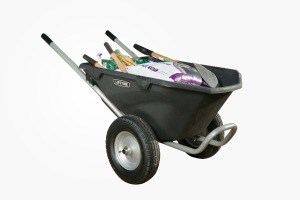 When I first saw the Lifetime Wheelbarrow (a two-wheeled wheelbarrow) I wasn’t convinced that it would be anything special. And the price tag seemed a little high (ranging from $169 to $179, depending on source). After all, you can buy a traditional wheelbarrow at your local hardware store for less than $60. But after using it to move 18 cubic yards of soil, two tons of rocks, and several very large, heavy shrubs, I’m a convert. In fact, I plan to donate my existing wheelbarrow to anyone who’ll take it!

So, what’s so good about this wheelbarrow? Let’s start with its construction. I like the fact that the tub is made of 100% post-consumer recycled material yet is strong enough to stand up to having boulders dropped into it from 5’ or higher. The frame and handles are made of powder- coated steel—they’re not likely to break like wooden handles and they won’t splinter. There’s even a rubber grip on the handle ends so you can hold it securely and comfortably. Finally, the tires are large (15.5 inches), easily inflated, and strong (2-ply), with powder-coated steel rims and metal bearings. This wheelbarrow is built to last. After a lot of use over the last two years and spending a winter outside, fully exposed to the elements, I can’t see any deterioration at all.

Lifetime advertises that the two-wheeled wheelbarrow will “lighten your workload by an amazing 85%.” Of course, I had to test that statement so I did to a comparison with my traditional wheelbarrow to see if I could notice a difference when moving soil and rocks. The 6.5 cubic foot tub has a load capacity of 550lbs. I filled it as full as I could (probably under 550lbs of soil, but maybe over that with rocks) and then moved the loads down the driveway, up a curb, and across the lawn, dumping the contents in a freshly-dug bed. I don’t know if it was 85% easier with the Lifetime wheelbarrow but there was a very marked difference. The only area in which a traditional wheelbarrow was easier to use was in hauling heavy loads across pea gravel – the two wheels on the Lifetime wheelbarrow sank so far into the gravel that it was difficult to move.

Not only did it take far less effort to move and dump huge loads, the Lifetime wheelbarrow was also much more maneuverable. In fact, I was pleasantly surprised at just how nimble it is. I’d expected a wide turning radius because of the two wheels but I found that it turns on a dime and I could actually spin it 360° in place with a full load. Try doing that with a traditional, one-wheeled wheelbarrow! 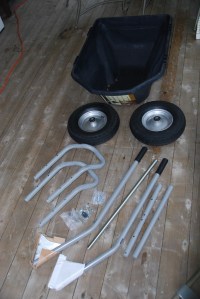 The Lifetime wheelbarrow parts are easy to identify and assemble.

As for the down side…. I have two issues with it.

First, the wheelbarrow comes unassembled (when purchased online) and will require two people to put together. The instructions are thorough and easy to follow, all the parts are easy to identify, and the hardware was sealed in clearly marked bags. Within 25 minutes I’d managed to get the main parts of the wheelbarrow put together. But that’s where the difficult part came in. In order to firmly attach the top and handles to the base and wheels, you need two people – one to tighten the nuts on the bottom of the wheelbarrow and one to hold the bolts in place on the top of the wheelbarrow. It’s simple enough to do, but it’s definitely not a one-person job. I finally gave up trying and went to ask for help…

Second, the metal bar sticking out the front makes it difficult to fully empty the tub when dumping material – you can’t get the wheelbarrow tipped far enough forward. But that’s really not a major problem in most instances.

All in all, this is a terrific wheelbarrow for any garden. If you’re going to be doing any heavy lifting, your back will thank you.

Where to Buy It

The wheelbarrow can be purchased directly from the manufacturer or through Amazon.