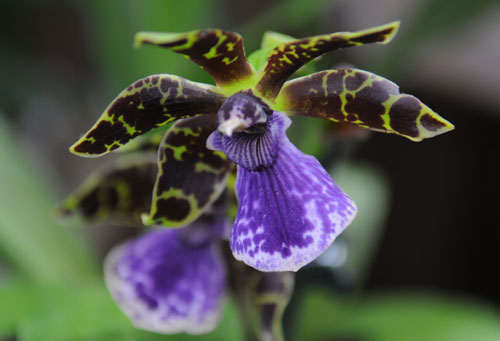 A zygopetalum orchid blooms in the Gardener’s Supply greenhouse.

THE beauty, complexity and incredible diversity of orchid flowers are unrivalled in the plant world. These exotic beauties comprise the largest family of flowering plants on earth, with over 30,000 different species, and at least 200,000 hybrids. Orchids can be found in the equatorial tropics, the arctic tundra, and everywhere in between. The reason for this diversity lies in the orchid’s amazing ability to adapt to its given environment. With so many different orchid varieties that thrive in so many different growing conditions, it is relatively easy to find an orchid that is well suited to the conditions that you can provide — whether it is a kitchen window or a full-size greenhouse.

Most cultivated orchids are native to the tropics. In their natural habitat, they attach themselves to the bark of trees, or the surface of other plants. Their thick, white roots are specially adapted to absorb moisture and dissolved nutrients. Because these tropical orchids usually grow high in the trees, rather than on the forest floor, they are accustomed to good air circulation and plenty of light. They prefer a 12-hour day, all year-round, and require a high intensity of light — about the same as midsummer conditions in temperate regions.

Unlike other plants and animals, orchids can produce hybrids between species, and also between related genera. This permits a mind-boggling number of hybrids, and is the reason for the very complex names given to most orchids.

Are orchids difficult to grow? Many of them are. In fact, some are almost impossible to keep alive, much less bring into bloom—even for professional growers. But there are dozens of varieties of orchids, and hundreds of hybrids, that are perfectly happy growing on a sunny windowsill or under lights.

For your best crack at success, start by choosing one of the less fussy varieties that is adapted to the type of growing conditions you can provide. Buy the most mature plant you can afford (young plants are much more difficult to please), and, if possible, buy it in bloom, so you’ll know what you’re striving for.

Orchids are usually grouped into two broad categories that characterize their growth habits. Monopodial orchids have a single, upright stem, with leaves arranged opposite each other along the stem. The flower stem appears from the base of the uppermost leaves. Orchids with this growth habit include the phalaenopsis and vandas.

The more common growth habit is sympodial. These orchids grow horizontally, sending out new shoots from the old rhizome. Leaves and flower scapes form at the top of the new shoots. Many sympodial orchids form pseudobulbs, which are swollen shoots that store water and nutrients to help the plant survive periods of prolonged drought. Sympodial orchids include cattleya, cymbidium, oncidium and dendrobium.

Orchids can also be classified by their native habitat, which gives an indication of the temperature, moisture and light levels they prefer. Orchids native to the humid tropics, such as phalaenopsis and paphiopedilum, prefer daytime temperatures of 73° to 85°F, with 80 to 90 percent humidity. They are happiest in an east or southeast window where the light is not too intense.

Warm-climate orchids, including cymbidiums and dendrobiums, are accustomed to an average temperature of 55° to 70°F, a steady supply of moisture, and good air circulation. They are generally happy in a south-facing window, though they may need a little shading during high summer.

Cattleyas and some oncidiums grow where days are dry and relatively cool. They are able to tolerate a long dry season with temperatures of 80° or 90°F, followed by a distinct rainy season. Their need for light is high, so they should be placed in a sunny, south-facing window.

High-altitude orchids, such as masdevallia and epidendrum, grow in the cloud forests where average temperatures are 60° to 70°F, and humidity is very high. These orchids prefer filtered light that is not too intense. 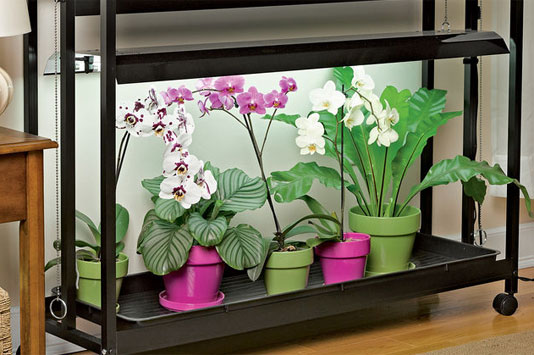 With 30,000 different species of orchids, it is impossible to give general care and cultivation instructions. However, how an orchid looks can provide clues to its preferences for light, water, and growing medium.

If the plant has few leaves, or leathery leaves (like most cattleyas and oncidiums), it’s likely the plant needs a high-light environment. If the leaves are soft and limp (like some phalaenopsis and most paphiopedilum), the plants are probably very light-sensitive, and should not be placed in a sunny south-facing window.

Light: As a general rule, orchids are light-hungry plants. For best results, they should get 12 to 14 hours of light each day, year-round. In a tropical environment, the duration and intensity of natural light does not vary as it does in temperate climates. For this reason, you may need to move your orchids around, and supplement with artificial light to keep them happy during the winter months.

South- and east-facing windows are usually the best spot for orchids. West windows can be too hot, and northern ones are usually too dark. If you don’t have a good window location for your orchids, they will be perfectly happy growing under artificial lights. Orchids should be positioned no more than 6 to 8 inches away from a set of 4-foot fluorescent bulbs. Opinions vary as to the benefits of cool white, warm white, and grow light bulbs. The new full-spectrum bulbs are probably the best all-around choice. Some orchids with very high light requirements, such as vandas and cymbidiums, may need high-intensity discharge lighting in order to flower. For more information, read Growing Under Lights. 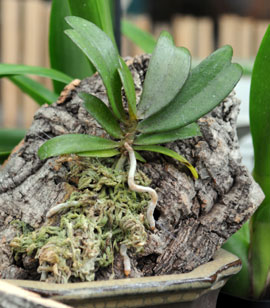 A tiny orchid trained to grow on a piece of bark.

Growing media: Terrestrial orchids, such as paphiopedilums and some cymbidiums, grow in soil. But most tropical orchids are epiphytes, which means that they grow in the air, rather than in soil. Their fleshy roots are covered with a layer of white cells called velamen, which acts as a sponge to absorb water. The coating also protects the roots from heat and moisture loss.

An orchid growing medium must provide good air circulation and permit water to drain very quickly. It must also give the roots something secure to cling to. Depending on the type of orchid, they can be happy growing in peat moss, fir bark, dried fern roots, sphagnum moss, rock wool, perlite, cork nuggets, stones, coconut fiber, lava rock or a blend that combines several of these materials. Some epiphytic orchids can also be wired onto slabs of tree fern or cork. As a general rule, fir bark nuggets are the most popular growing medium.

Watering: Most orchids can tolerate drought far better than they can tolerate excess moisture. Nothing kills an orchid faster than letting it sit in a water-logged pot. Without adequate air circulation, the plant will suffocate and die.

As a very general rule, orchids should be watered once a week. The growing medium should be allowed to dry out between waterings, and excess water should not come in contact with the roots or the growing medium. After being re-potted, most orchids will not resume active growth for several months. Water very sparingly during this readjustment period. 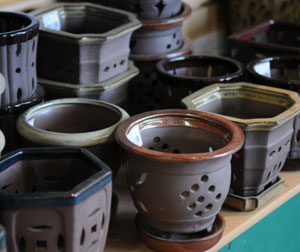 Humidity: Most tropical orchids prefer humidity levels of 60 to 80 percent. With the winter-time humidity level in most homes hovering closer to 30 percent, orchid growers often use a humidifier, or set their orchids in
special humidity trays or gravel-filled trays. Some orchids also benefit from being misted.

Fertilizer:
Orchid-growing mediums provide very few nutrients, so orchids must be fertilized to sustain healthy growth.
Use a liquid fertilizer, and dilute it more than you would for other plants. Fertilizer should only be applied when plants are in active growth. This means that most orchids should not be fertilized in midwinter, or right after they have been re-potted. Many growers use a 30-10-10 fertilizer, though others prefer 10-10-10 or 10-10-30. Misting your orchids with fish emulsion or seaweed extracts will provide micronutrients.

Potting and re-potting: Orchids are usually happiest in a relatively small pot. Plastic pots are preferred because when it’s time to re-pot, the roots can be more easily detached, or the pots can simply be cut apart. To ensure good drainage, you can fill the bottom inch or two of the pot with foam “peanuts.” Suspend the orchid over the pot, and gradually fill the pot with fir bark chunks or whatever other growing medium you are using. The crown of the plant should be just a bit below the top of the pot. Sometimes it’s helpful to use a bit of wire to secure the plant until its roots get established.

Some orchids should be re-potted every year. Others may be happy in the same pot for seven or more years. As a general rule, don’t re-pot your orchid unless necessary. Orchids resent being disturbed. Re-pot if the growing medium has started to break down enough to reduce aeration; if the roots are creeping out well beyond the pot; or if new growth has unbalanced the plant.

Propagation: Propagating orchids from seed is quite difficult. Unlike the seeds of other plants, orchid seeds do not contain nutritional storage tissues. To grow, the seed must land where it will find a particular kind of fungi that can penetrate its root system and convert nutrients into a usable form. To overcome the odds, an orchid seed capsule typically disburses millions of microscopic seeds, which can be carried hundreds of miles from the mother plant.

To propagate orchids from seed, you must work in sterile conditions. The seeds must be grown in a gelatinous substance that contains nutrients and growth hormones. You must also be very patient. It takes months for the first leaves to develop, and, even then, they will only be visible with a magnifying glass. Roots appear even later. It will be at least three, and possibly as many as eight years before you see a bloom.

It is far easier to propagate orchids by division. But remember that dividing a plant means forsaking blooms for at least a year. Also, the larger the orchid plant, the more flowers it will produce. Small divisions take many years to mature.