From Blacktop to Beauty

With a prayer and a pickax, even the most egregious eyesore on a property can be turned into something appealing.

My own rose garden, pictured here, is testament to the power of transformation. Today, fragrant flowers bloom between ribbons of boxwood, and two classical fountains gurgle where the biggest eyesore you can imagine once existed: a parking lot.

Kevin Lee Jacobs blogs at A Garden for the House. He was introduced to gardening when he was no taller than a delphinium. Today, his home in Upstate New York features formal rose gardens outdoors and lavish window gardens indoors. 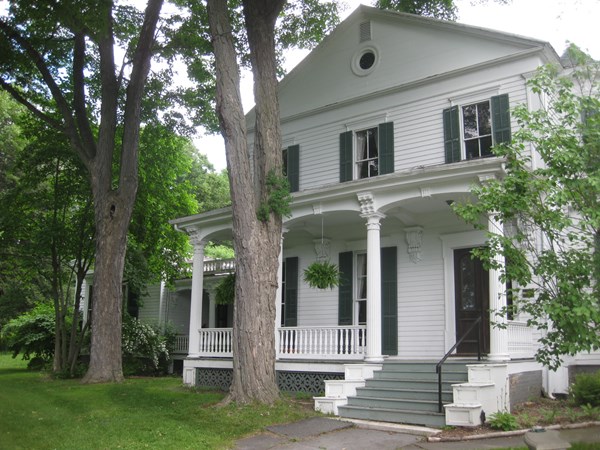 Although our Federal-era house, which my partner and I purchased in 2002, was on the National Register of Historic Places, its four acres of grounds were certainly not on any Botanical Society’s registry. In fact, there were no gardens here at all. There was, however, a parking lot directly behind the house—and, of course, it was in the perfect, sunny spot for a garden. Yes, a parking lot, thickly paved with asphalt.

I viewed this lot daily, with great disdain, from the office, the kitchen, and the guest room windows. But the more I looked, the more I saw roses, evergreens, and fountains in place of the asphalt. Four years later, once the house was restored, we hired a contractor to remove every last trace of blacktop.

Roderic Blackburn, a friend who has authored many books on historic properties, drew up a design for the garden I’d envisioned: two 50-foot circles, intersected with brick walkways, and framed with the upright yew, Taxus hicksii. Within each circle would be four boxwood-edged, hexagonal rose beds and a three-tired fountain. 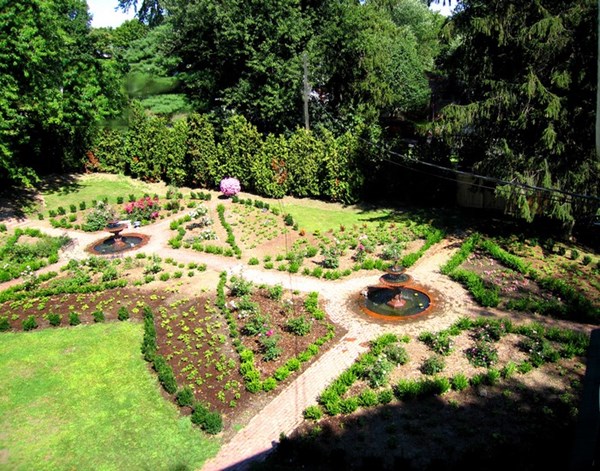 You haven’t lived until you’ve tried to dig in soil which has been covered with a thick layer of asphalt for at least 20 years. “Compacted” doesn’t begin to describe it. I rented a gas-powered post hole digger to make openings for the edging plants—190 yews and 320 boxwoods.

I purchased the upright yews first. To reduce their cost, I forfeited the warranty the garden center normally offers. Keep this in mind if you ever need to buy vast quantities of a single shrub, as it will often entitle you to a 10% discount.

Yews are extremely slow-growing evergreens, and thus even tiny, young plants (which I bought) can be very expensive. 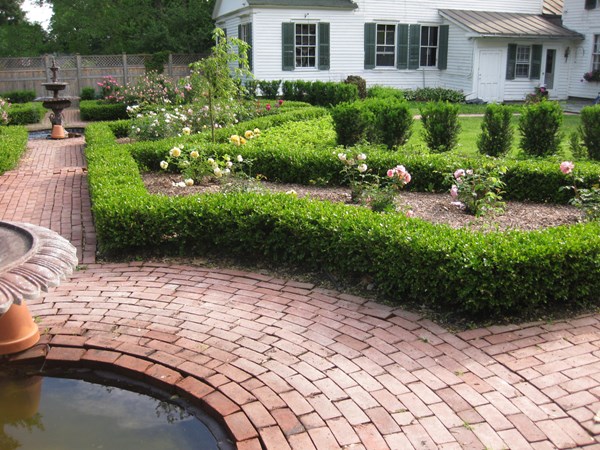 Unfortunately, after the yews were purchased, there was scarcely enough money left to buy sufficient boxwood. So I bought enough plants to outline the geometric rose beds, and then I tucked boxwood cuttings (clipped from my existing stock) in between the plants. The cuttings rooted quickly, and two years later, the young plants matched the stature of their parents. 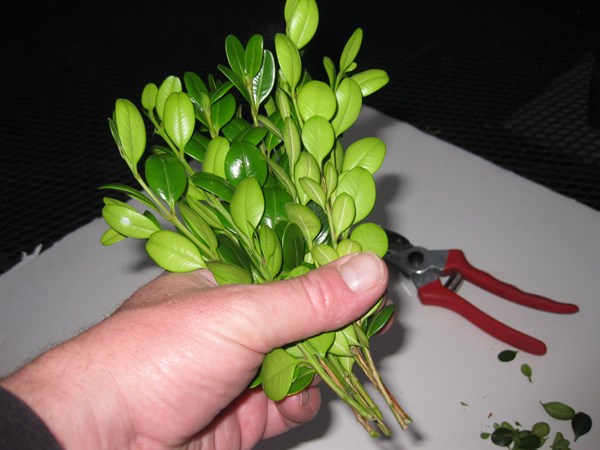 Boxwood is very easy to propagate. In the spring, take stem cuttings, 6 inches in length, and remove the lower inch of leaves. For the best effect, group five to seven stems together, as pictured, to resemble an entire plant.  Plunge this group into soil that has been amended with copious quantities of peat moss or leaf mold.  Pack the soil firmly around the stems. Keep the cuttings moist, and you will have new, rooted plants in about six weeks. 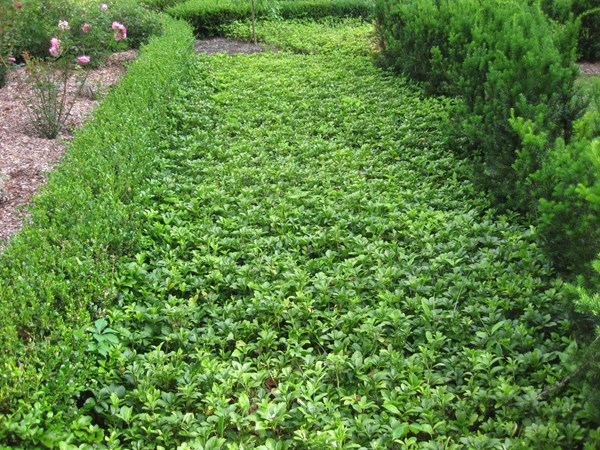 I planted Pachysandra terminalis in the sweeps between the boxwood borders and the yew frame. I acquired it for free, as most gardeners do, by accepting cuttings from a neighbor’s overgrown patch.

Don’t let anyone tell you this evergreen ground cover can’t be planted in full sun and poor soil. It just grows faster in part shade and good soil. True, mine received considerable moisture the first three years after planting. Now, however, it has filled in so beautifully that its leaves shade the soil. I no longer water it. 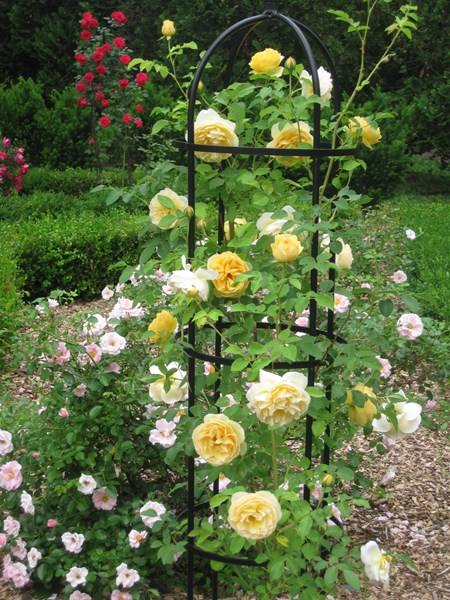 I chose mostly David Austin varieties for the roses because they offer glorious forms and fragrances, including the yellow Graham Thomas ® in the photo. I used a pickax to dig huge holes for each shrub and then filled the holes with commercial potting mix. (Cheating, I know, but back then I didn’t have a stockpile of leaf mold.) The roses flourished in the peat-rich formula that their roots could easily penetrate and since then, mountains of shredded leaves have been added to the rose beds annually. Now, five years later, the soil is friable, filled with worms, and very easy to dig. 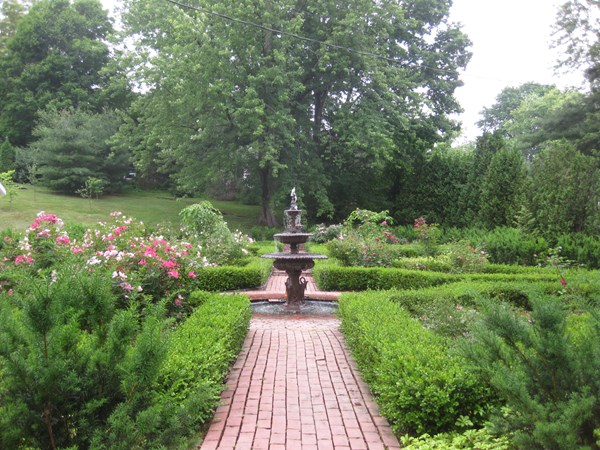 The moral of my parking-lot-to-rose-garden story is this: You can make a garden anywhere. All you need is a bold vision, a determined attitude, and an unflinching desire to turn an “impossible” situation into your own special paradise of fragrance and color.