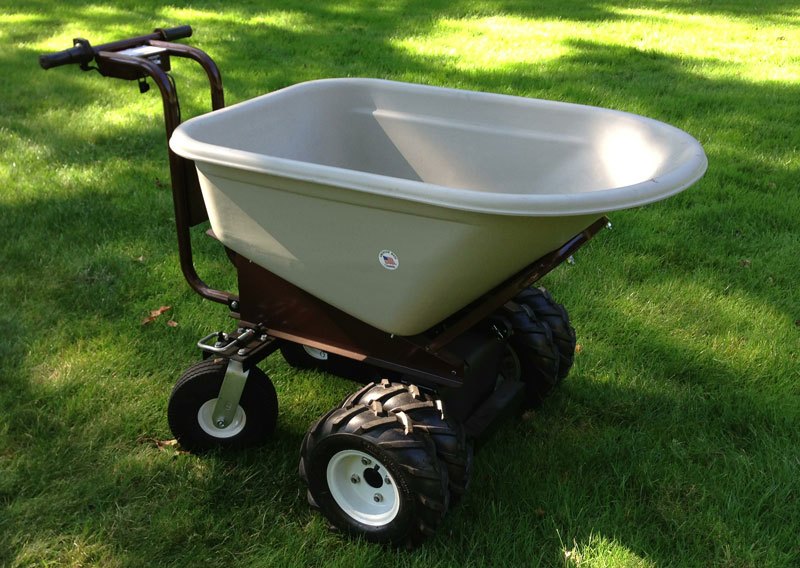 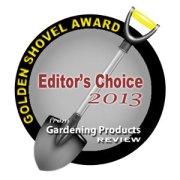 Before trying this one, I’d never even heard of such a thing. But now that I’ve used it for several months, I’m a convert.  In fact, I can’t imagine using a non-powered wheelbarrow again!

We tested the C27-7A electric power wheelbarrow from www.electricwheelbarrows.com. This has a slightly smaller hopper capacity (7 cubic feet) than the newer model (C27-8A, with an 8 cubic feet capacity) but was in all other respects identical.

The unit doesn’t look like a traditional wheelbarrow at all, but it performs all of the tasks of a regular wheelbarrow – and then some.  Movement is controlled with a throttle on the right handle (similar to what you’d find on a motorcycle). The handles are padded for comfort and the dual ag wheels allow you to drive over rough terrain.

All of our testers found the electric wheelbarrow easy to use. Here are the features we liked best …

I was surprised at just how nimble this electric wheelbarrow is. Unlike most models, which have only one or two wheels, this one has four – and it’s those extra two wheels that make it very stable and easy to maneuver. The two rear wheels are on casters that spin 360 degrees, meaning that the back of the wheelbarrow (including the handles) swings easily from side to side to follow the front wheels.

We put the barrow through a slalom course which it handled with ease (I wish we’d shot video of our testers running up and down the course of orange safety cones with the electric wheelbarrow!). You can easily drive the wheelbarrow into tight spaces, around obstacles, and make quick course adjustments as you go.

The wheels are pretty rugged too, with good treads that provide traction on all but the most slippery slopes.

Move Heavy Loads With No Effort

This wheelbarrow holds 750 lbs. Most single or dual wheeled models couldn’t handle that kind of load without blowing the tire(s).

But there’s not much use in holding that kind of weight if you can’t move the wheelbarrow. With this model, that’s no problem at all. Simply turn it on, twist the throttle, and go. No pushing, no straining, no effort at all.

The one caution is when carrying heavy loads up a steep hill; the steeper the slope, the lighter the load should be.  On a 3:1 slope, the company suggests carrying no more than 500 lbs – but that’s still a pretty heavy load!

The first time I used the wheelbarrow I was taken by surprise when it took off like a race car!  Top speed is 2.4 mph and it gets up to speed quickly. That’s a comfortable but brisk walking pace for most people. And it reaches that speed going both forward and backward.

With that kind of speed, braking could be an issue. So the company has built in a feature that causes the wheels to slow down (or speed up) in direct relation to what you’re doing to the throttle. This is especially nice when heading downhill with a heavy load. A non-powered wheelbarrow could easily get away from you on a steep downhill, but the electric wheelbarrow just keeps moving at the speed you set it at.

When you turn the throttle, it takes a few seconds before the wheelbarrow actually starts moving. Don’t crank the throttle to full speed right away; start slowly and let the wheelbarrow get moving before you adjust the speed, otherwise you may find yourself suddenly running behind it! 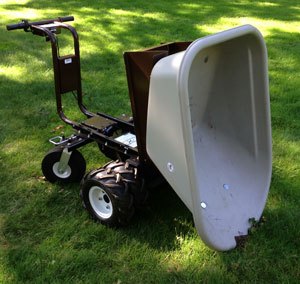 The Electric Wheelbarrow is easy to dump and empties completely.

One of the frustrations of typical wheelbarrows is the difficulty of dumping all of the contents. Because of the design, it’s almost impossible to position the hopper/pan in such a way that it empties completely. I’ve often found myself scooping out the last of the contents by hand.

The beauty of the hopper design on this electric wheelbarrow is that it’s positioned perfectly for completely emptying the hopper contents when you lift it up. Simply release the safety pin that holds the hopper in place, lift, and voila – it’s empty.

We were a little skeptical that we’d be able to easily dump loads of up to 750 lbs. So we were surprised to find that even the least “buff” of our testers were able to lift the full hopper and empty it with relatively little effort. Speaking for myself, I know I’d never be able to do that with a traditional wheelbarrow (or even with the Lifetime 2-wheeled wheelbarrow which we reviewed earlier this year).

This is a battery-powered wheelbarrow; it uses two 12V, sealed, lead acid, rechargeable batteries that are located in the base of the unit (under the hopper). We used it extensively for a wide range of tasks, including hauling heavy loads and carrying material up steep hills, and found that it lasted all day without needing to be recharged.  With the start-and-stop usage that would be typical for most of us, the company says that it should last 7.5 to 11.5 hours – more than enough for a full day of work.

To recharge the unit, simply plug it into any electrical outlet using the 6-foot cord. It’ll recharge overnight and be fully charged by morning.

The battery indicator by the throttle on the right handle lets you know if you’re running low on power. 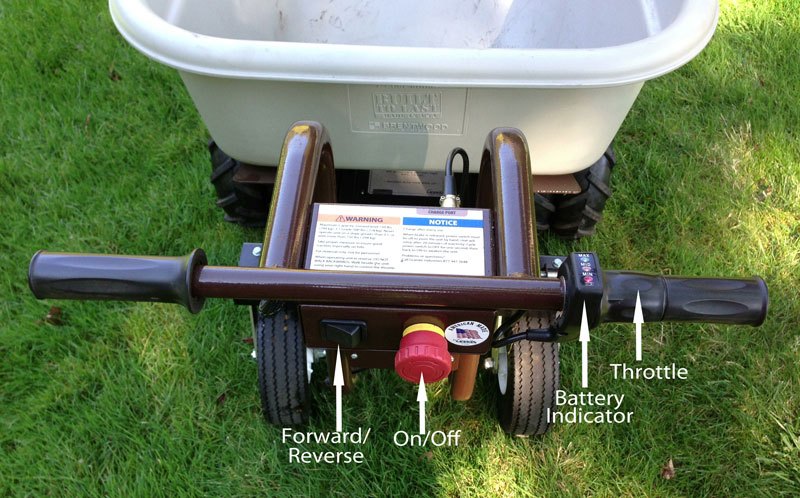 The Electric Wheelbarrow controls are all within easy reach and are simple to use.

It’s not always possible to turn around with a wheelbarrow. So the reverse feature on this model is fabulous.

Be aware that moving backwards can take a bit of getting used to. To operate the wheelbarrow in reverse, simply flip the switch from ‘Forward’ to ‘Reverse’ and then turn the throttle (in the same direction as when you’re moving forward). The trick is to stand beside the wheelbarrow, not behind it or you risk being run over. Think about like leading a horse; the wheelbarrow should be beside and a little behind you as you walk forward, operating the throttle with your right hand.

Easy Off Button For Safety

Safety is always a consideration when working with power tools of any kind, and the electric wheelbarrow is no exception. The company has placed an oversized, red on/off button on the control panel within easy reach of the operator. If you start to lose control of the unit, or feel uncomfortable in any way, just tap that red button and the wheelbarrow will immediately turn off.

You really have to see this wheelbarrow in action to fully appreciate how easy it is to use. The company has a nice video showing the various features of the unit and I recommend watching it (see video below and ignore the poor sound quality).

We give the C27-8A Electric Wheelbarrow a 5-shovel rating. It’s a sturdy, well-designed wheelbarrow that runs for a full day on a single charge, moves easily and quickly, dumps the full contents with little effort, and goes backward as readily as it goes forward. If you have a lot of heavy material to move, this is the tool for you.

Where to Buy It

The full series of electric wheelbarrows, as well as battery-powered wagons and accessories, can be purchased through the official website at www.electricwheelbarrows.com.

The C27-8A (27″ Chassis with Heavy Duty 8 Cubic Foot Dump Hopper & Dual Ag Tires) can be purchased for $2,070.00. Other models are available at both higher and lower price points.