I have to be honest.

When I first saw the Earth Talon shovel I thought the pointed end was nothing more than a gimmick.

But after putting it to the test in the hard, rocky soil of the Catalina Foothills in Tucson, I’m a fan.

The Earth Talon shovel is specifically designed for use in rocky and hard clay soils.

Overall, it looks like any well-designed shovel – but with part of the blade shaved off. That 2-inch point is intended to focus energy (the force you exert when digging) into a smaller surface area, increasing the digging power of the shovel blade. In other words, you can dig deeper and easier with all of your energy focused on that point.

But does it really make a difference? 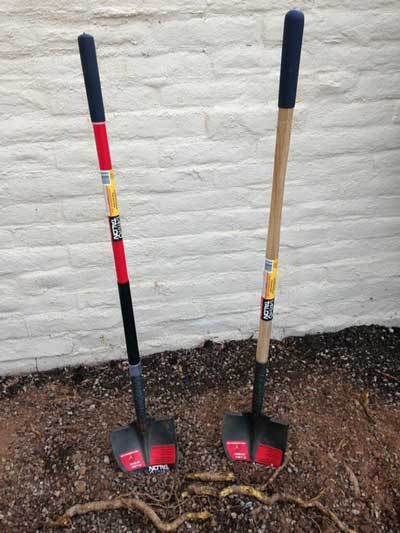 I sent my husband into the back yard to dig a trench for the new TV cable. Ten minutes later he came inside to tell me “Wow, that shovel is amazing!” No, he hadn’t finished trenching in 10 minutes but the Earth Talon shovel was making the job much, much easier.

Not only did it sink through the gravel, sand and dirt with relative ease, but it quickly chopped through large, tough roots. Simply place the Earth Talon’s point on the root, step down on the foot rest and the root is severed. Alternatively, lift the shovel and slam it down onto the roots. It may not cut the roots cleanly, but it sure gets the job done. 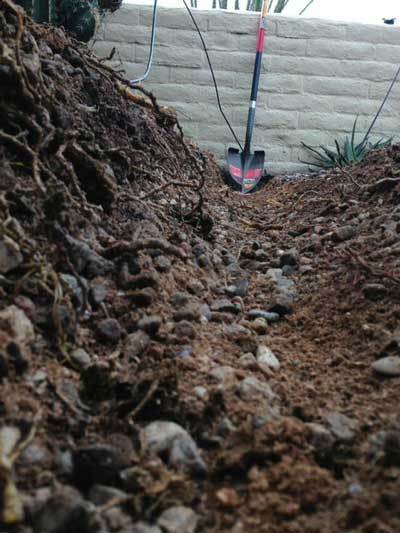 The Earth Talon shovel made quick work of digging a trench

The shovel was also effective at prying up rocks (not boulders!). I was concerned that the point might bend but after an afternoon of removing rocks to make a new vegetable bed there was no damage at all to the point.

The Earth Talon did a great job of getting under the surface and then cutting through the soil and gravel horizontally. This made trenching easier and, although we don’t have grass here, I’m sure it would make quick work of removing sod.

We also tried using the Earth Talon shovel to dig up unwanted aloe plants that had spread throughout the yard and to dig planting holes for some new penstemon plants. Digging up weeds was easy; the point severed the roots and popped up the plant with ease.

Although the shovel is highly effective as is, I expect that sharpening the blade would make a big difference (the shovel arrives with a protective cover over the point but the edge isn’t sharp), especially for cutting through roots.

Related Article: How to Sharpen a Spade

Digging holes with the Earth Talon shovel required a little more effort – not because it was difficult to dig down to the necessary depth (that part was easy) but because the blade design makes it hard to scoop up a lot of soil.

Imagine sinking the blade half way into the ground, pulling back, and then lifting the soil with the shovel. Because a large slice of the blade is “missing,” you can only scoop about half as much soil as with a regular shovel. In the end, we resorted to digging holes with the Earth Talon shovel and scooping out the soil with an old, rusty shovel from the garden shed. 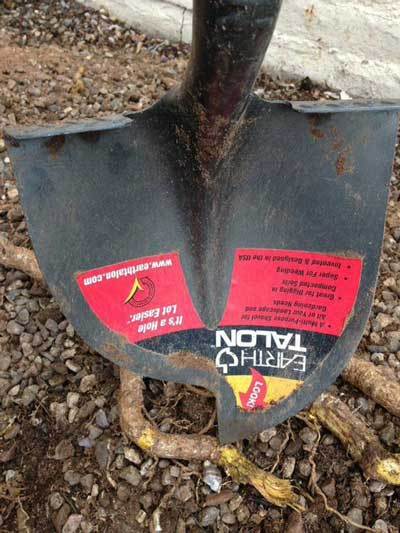 The Earth Talon digs through large roots with ease

Although it looks like the shovel would be unstable (I was sure that it would lean to one side each time I shoved the point into the ground), that proved not to be the case. Other than the excellent penetration, using the Earth Talon felt like digging with any other shovel.

The point on the blade also has a few unexpected benefits. Because it’s smaller than a normal shovel, you can get into tight places with the tip (much like using a trowel). It was also helpful for scribing lines on the ground and poking holes in bags.

We tried both the wood and fiberglass handle versions of the Earth Talon. Both performed the same in terms of digging, trenching, root chopping, etc. although the fiberglass version is heavier. If strength or endurance is an issue for you, I’d recommend the wood handled shovel. However, the fiberglass handle would likely be better if you’ll be doing a lot of heavy digging or prying up large objects. 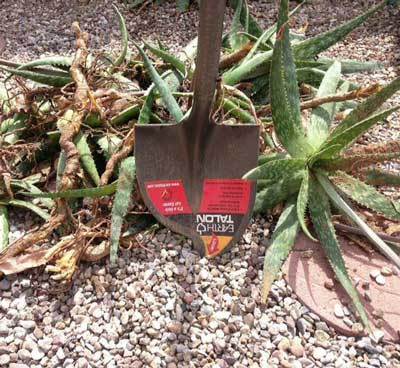 Weeding with the Earth Talon

The blade on the Earth Talon shovel is made of hardened, tempered steel with a powder-coated finish and an extended steel neck. It’s firmly attached to the shaft with two rivets – there was no looseness at all – and a steel shank where the two attach.

There’s a foam grip at the end of the handle, giving you a little more grip and cushioning for your hands.

The foot rest is nice and wide and is well-positioned, making it easy to stomp down on the shovel without hurting your foot. My husband found he didn’t need to use the foot rests because of the shovel’s great penetration but if you have less upper body strength, the foot rests are a nice addition.

We give the Earth Talon a 5-shovel rating. It has excellent penetration in hard, rocky soil (meaning that it takes less energy to dig), is well-built, comfortable to use, and does what it’s meant to do incredibly well. In my husband’s words, “This is the best shovel I’ve ever used for trenching and digging in hard soil.”

You can buy the Earth Talon shovel directly from the manufacturer at www.earthtalon.com. However, better prices are available on Amazon for each of the three models. Prices hover around $30 and the shovels are Amazon Prime eligible.

And for carrying your new shovels, see our review of the Shovel Sling.

Now over to you – Have you tried a “unique” shovel before? How did it work? Let us know in the comments below!