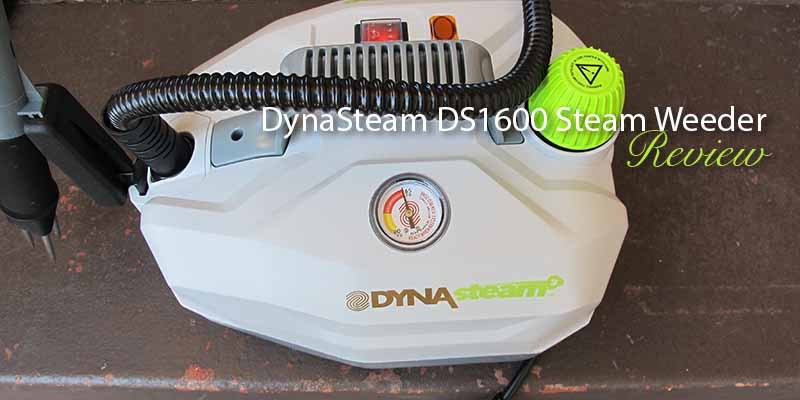 One of these days I’ll be able to replace my driveway and walkway with all new hardscape. But until that day comes, I know I’ll be doing battle with weeds that sneak into every little crevice of the existing cracked concrete and brickwork.

Generally, I use a weed-trimmer on it (my most hated garden chore!) but I’ve also tried pouring boiling water on the weeds (painstaking) or spraying them with an organic herbicide (hit-or-miss results). So I was very intrigued with the prospect of using the DynaSteam steam weeder.

The DynaSteam works by shooting pressurized steam onto a weed, shriveling the leaves so the plant can’t photosynthesize and process nutrients. The plant should then die and can be easily removed (or it’ll shrivel away to nothing). The concept is similar to weed flaming (see our review of the Weed Dragon flame weeder). 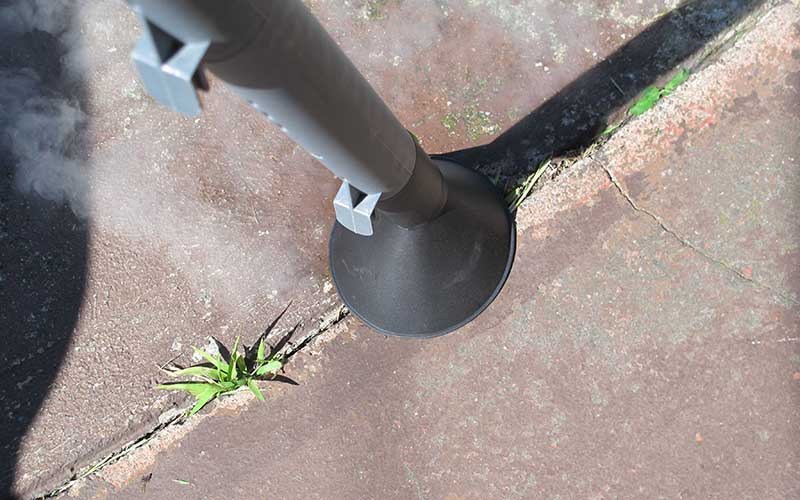 The DynaSteam works by shooting pressurized steam onto a weed, shriveling the leaves so the plant can’t photosynthesize and process nutrients.

The DynaSteam system arrived neatly packaged in a sturdy box. All of the parts were easy to identify. 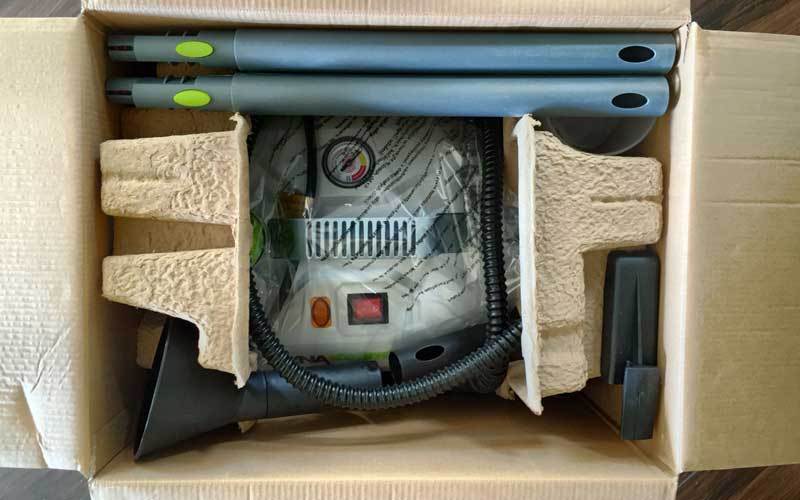 The complete system comes with the machine itself, the trigger handle and hose, two detachable wands, a measuring cup and funnel to fill the machine with water, and three attachment heads:

You can also purchase additional attachments to extend the DynaSteam’s functionality to other tasks indoors and out, but I only tested the basic kit. 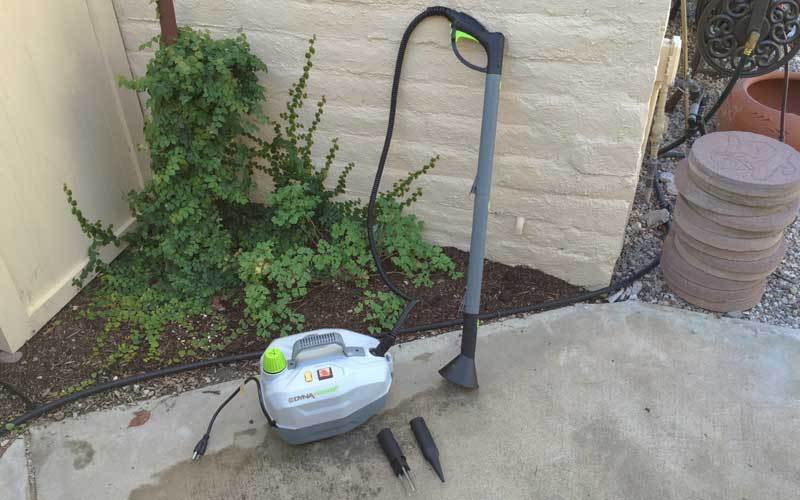 The DynaSteam unit with all of the standard attachments.

To use the DynaSteam, fill the tank with about 6 cups of water, plug it in, and turn it on. It takes about 5 to 10 minutes for the system to become fully pressurized and ready to use; the pressure dial indicates when it’s ready when the dial moves into the red area.

Editor’s Note: If you live in an area with particularly hard water, DynaSteam recommends that you use distilled or filtered water to fill the tank. 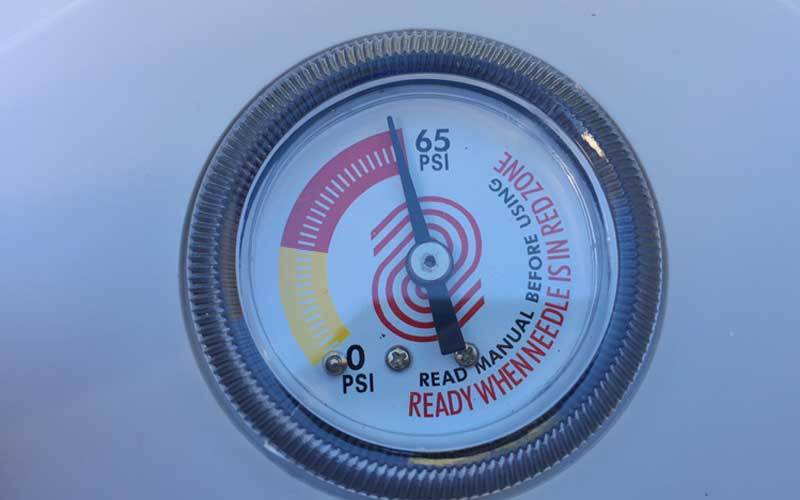 It’s easy to tell when the DynaSteam has built up to full pressure and is ready to start steaming weeds.

With one of the attachments installed on the trigger handle, you’re ready to start steaming. A full water tank will provide about 30 minutes or more of steaming, although there will be times when the pressure will dip and you’ll have to wait for it to build up again before you can continue.

According to the instruction manual, a shot of steam lasting 5 to 10 seconds is sufficient to treat each weed.

For optimum results, you need to use the DynaSteam when it’s dry and sunny. During an off-and-on rainy spring, it was a little tricky finding just the right time to use it. Even after waiting three days following the last rain, I’m not sure if the soil was actually dry enough for the steam to work its best. 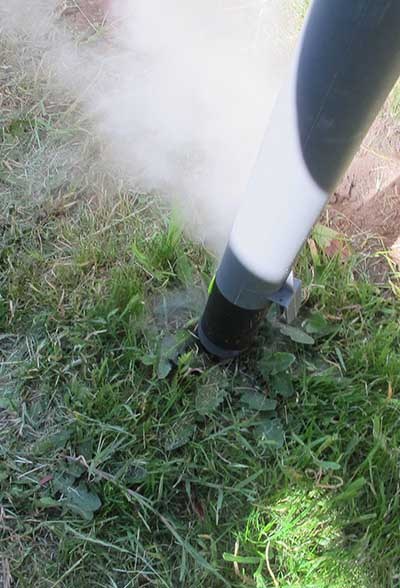 The DynaSteam works by shooting pressurized steam onto a weed, shriveling the leaves so the plant can’t photosynthesize and process nutrients.

The DynaSteam is a corded system, so on larger properties that may limit its range. The cord that comes attached to it is only about 18 inches long, but with a 50-foot grounded extension cord I was able to get it where I needed on my small property.

With the tank full of water, the system is about 8 lbs. and I could pull it short distances over lawn and concrete with no problem. There’s a handle on the top of the machine and a clip on the front to hold the wand and hose so it’s easy to pick up and move around. In uneven or rocky terrain, you would probably have to pick it up to move it

The instruction manual comes with the usual warnings you’d expect with an electrically operated steam machine–most importantly that the machine shouldn’t be operated by children and that the steam shouldn’t be directed at people, animals, or electrical devices. With ordinary use, however, the DynaSteam feels safe to use.

The steam only comes out when your finger is on the trigger; as long as you keep your hands away from the trigger handle, you can easily change attachments while the machine is turned on without burning yourself with the steam.

The attachments are mostly plastic and don’t really get hot to the touch. The exception is the three spikes on the triple root spike, but it’s still easy to avoid touching the spikes when changing the attachment.

Ergonomically, the DynaSteam is best suited for brief periods of use. The trigger handle could get very tiring for your hand after extended use and the wands, which total 26 inches in length (plus the attachment), might cause a taller person to have to bend over, leading to back strain. (I’m 5’4″ and was able to use it without bending or leaning.) 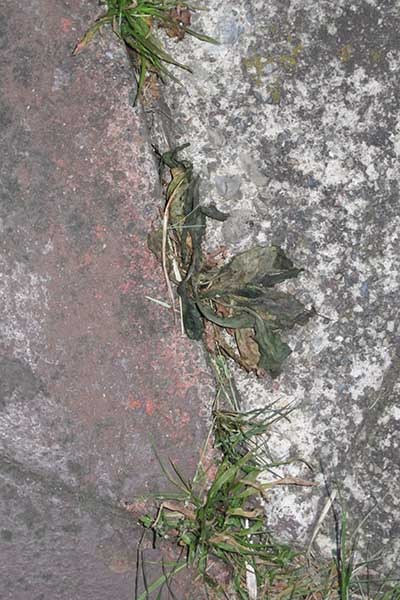 After steaming, the plant will shrivel up and die (although it may take a day or two to see results).

I tried out all three attachments on a variety of weeds in hardscape, as well as dandelions growing in lawn and in a river rock bed.

The DynaSteam worked most effectively on immature weeds and broad-leaved weeds, rather than grassy weeds. It also worked best on the weeds that I used the cone attachment on.

The precision tip really only worked well on very small weeds that it was able to blast out of the crack.

As for the triple root spike, I’m not sure that it really shoots the steam deeply enough to damage a dandelion’s long tap root; you can see a lot of steam leaking out above the soil. In both the lawn and the river rock bed, even when I gave the dandelion repeated shots of steam, the leaves shriveled a bit but it didn’t seem to kill it.

My garden has sandy soil so the steam should have penetrated easily—I expect it would be harder for the steam to penetrate in heavy clay soil.

The DynaSteam is easy to use, lightweight, and with the additional attachments would be very useful for other chores, but I didn’t get the results I hoped for in terms of weed abatement. I like that it is a chemical-free treatment but its effectiveness is spotty and seems to be subject to variables like moisture and soil type, as well as the size and type of weed being targeted. Under the right conditions and on the right weed, it works fine but it’s not an inexpensive tool and for the cost, I would expect to get more consistent results.

The DynaSteam steam weeder is available at www.dynasteam.com for $249. There is also a nine-piece accessory kit to do other steam-cleaning tasks (such as cleaning windows) for $49.99 and a brass BBQ grill brush for $14.99. The DynaSteam is also available at Frontgate.com and Amazon.com, although the Amazon price is considerably higher.

Now over to you – What’s the most effective weeding tool you’ve tried? Let us know in the comments below!