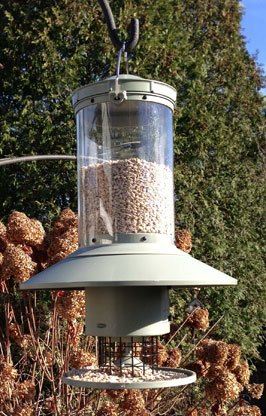 The Wingscapes AutoFeeder is a battery-powered, programmable wild bird feeder that releases bird seed up to four times per day. Because of its technological advancements, the AutoFeeder was honored as a Best of What’s New winner by Popular Science magazine.

The AutoFeeder consists of a seed bin with a locking lid, a programmable timer, a feeder platform that holds the seed after it’s dispensed, and a baffle to deter squirrels and protect the feeder platform from weather.

I was a little surprised at how large the AutoFeeder is – somehow, the pictures online make it look smaller than it really is. When fully assembled it’s 21 inches tall and 13 inches wide.

Easy to Fill the Bird Feeder

The clear plastic seed bin can hold up to a gallon of any type of bird seed. That’s a lot of seed! As a result, the feeder can be rather heavy so be sure to hang it from something that’s securely fastened and won’t fall over (when empty, it weighs 3 1/2 lbs).

The metal lid lifts off the seed bin (it’s easy to remove and locks in place with a slight twisting motion), giving you plenty of room when filling the bin. A nice feature is the metal wire that attaches the lid to the bin – you’re not going to lose the lid or misplace it. And the lid is vented so the seed inside doesn’t get moldy.

Easy to Program the Timer 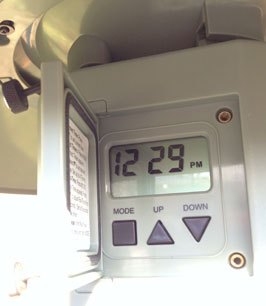 The Wingscapes AutoFeeder uses a programmable timer that releases seed up to four times each day. It runs on four AA batteries that should last 6 to 9 months, depending on temperatures (colder weather drains batteries more quickly).

To set the timer, turn the two black plastic knobs to open up the door that protects the electronics from the elements. The knobs are easy to turn (although they’re a little small if you’re wearing gloves) and keep the door tightly sealed when it’s closed. Make sure you tighten them all the way when you close the door.

The button on the left allows you to select the ‘mode.’ The two options are the time of day at which you want the seed to be released (up to four times a day) and the number of seconds for which bird seed will flow out of the bin when seed is released (from 0 to 20 seconds). You can set the timer for a different number of seconds at each of the four release times.

It may take a few tries to figure out how long to set the timer for – too long, and seed overflows the tray and ends up on the ground; too short, and the seed is all eaten almost immediately.

Different types of bird seed flow at different rates so you may need to reset the timer if you change seed type. 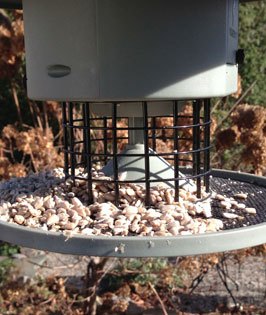 When the timer releases the bird seed, it flows out of the bottom of the seed bin. It falls onto a cone-shaped protrusion that directs the seed evenly all around the feeder platform. The platform is perforated to allow drainage and keep seed dry.

Because of the overhanging baffle, it’s a little more difficult for large birds to perch on the feeder platform. As a result, most visitors to the feeder are smaller birds, like chickadees, wrens, and sparrows.

Because seed isn’t continuously available to birds, it lasts longer. Wingscapes suggests that birds can be “trained” to visit your bird feeder at the times seed is released; if you program it to release seed when you’re most likely to be there, you’ll see more birds. I’m not sure if that’s true or not, but birds quickly appear when seed is available. I tend to release as much seed as will stay on the tray and space it evenly over the day so there are always birds at the feeder.

In our trials, seed lasted noticeably longer than in other bird feeders. Also, because the larger birds don’t tend to feed at the AutoFeeder as often, far less seed is scattered on the ground.

The Wingscapes AutoFeeder doesn’t come with a separate instruction manual. Instead, assembly and programming instructions are printed on the inside of the cover wrapped around the seed bin. So take that off before trying to put the pieces together!

There are quite a few pieces that need to be snapped together to form the squirrel baffle and feeding tray, and it can take a bit of fiddling to get it right. You may want to enlist a helper to hold parts in place as you assemble it. And be sure to assemble it in the order specified in the instructions, or you’ll end up with extra pieces that don’t fit.

The AutoFeeder is made of a combination of heavy-duty plastic and metal parts. Mine has been hanging outside for three months and looks exactly like it did when it was installed. That’s not to say that it’ll last forever, but early indications are that it’s quality construction that will stand up well to all kinds of weather. It also has a 2-year limited warranty which includes manufacturer defect, electronics/motor failure, and bird/squirrel damage.

We give the Wingscapes AutoFeeder a 5-shovel rating. It works exactly as advertised, is made of quality materials, and helps your bird seed last longer. Keep in mind that it’s larger than many bird feeders and, when full, can be quite heavy.

Where To Buy It